As against, a passive component is not able to give the energy to the circuit in which they are employed.

Here, in this article, you will get to know several differences between active and passive components. But before proceeding further, just put an eye over the contents that we are going to discuss here.

Active elements are those components present in the circuit those are able to provide power or energy to the circuit by extracting the power from an external source.

And the ability to supply the energy continues for an indefinite time period till the presence of external supply source.

As active elements provide the power to the circuit in which they are employed thus acts as generators. Also, these hold the ability to control the flow of current through the circuit.

The elements like a diode, transistor, op-amp etc. are known to be active components in any circuit. Let us have a look at the brief discussion of these components:

A diode is an active component that is used to direct the current that is flowing through the circuit by allowing conduction in a single direction only.

The figure below shows the symbol of a diode:

In a similar way, a transistor performs amplifying action of the current in the circuit.

The figure below represents the symbol of the transistor: 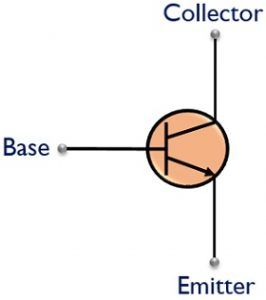 Basically, transistors are classified as BJT and FET.

Passive elements are those circuit components that cannot produce energy in the circuit in which they are employed. But they can store or dissipate the power present in the circuit.

Also, passive elements do not need external electrical power for their operation. Along with that due to bidirectional nature, passive components can be connected in either direction in the circuit.

Due to their power storing and dissipating ability they function as attenuators.

Passive components are resistor, inductor and capacitor etc. Let us have a brief description of these components:

The quantity that measures the amount of restriction offered by resistors is known as resistance. And its unit is ohms.

The figure below represents a resistor R:

The resistance of a resistor is given as:

: V is the drop across the resistor and

I denote the current flowing through that particular resistor.

Capacitance is the unit that determines the amount of charge stored by the capacitor. Its unit is farads. The figure shown below represents the symbol of a capacitor:

It is given as:

: Q represents the charge stored and

V represents the voltage across the plates of the capacitor.

Till the time current flows through the circuit, energy gets stored within the turns of the coil.

Inductance is the unit used for measuring the magnetic field stored within the coil. Its unit is Henry. The figure below shows the symbol of inductor:

Inductance is given as:

: 𝜙 denotes the flux linking and

I denote the current flowing through the inductor.

So, from the above discussion we can conclude that despite being the part of the same circuit, both active and passive components have their own region of operation. Passive elements possess symmetricity because they put a similar effect on all the signals irrespective of their polarity.

But this condition is not applied in case of active elements as they exhibit asymmetricity, according to the type of component it is.