Definition: LCD is an acronym used for Liquid Crystal Display. It is basically a display technique in which liquid crystals are used in order to produce an image on the screen.

Unlike an LED, an LCD does not hold the property of producing light. However, it allows some regions to appear either bright or dark by controlling the light energy emitted by an external source. 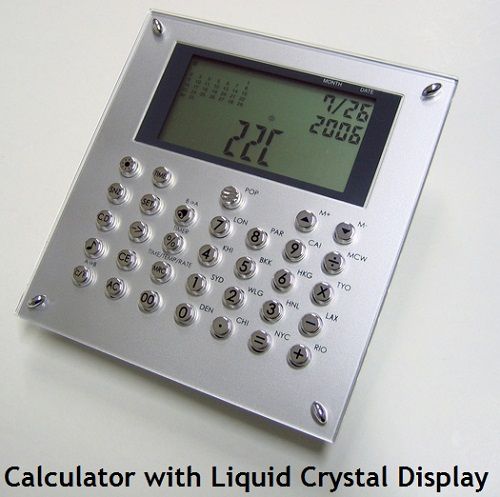 Now, before discussing how an LCD operates, it is necessary to have an idea about the liquid crystals.

What are Liquid Crystals?

Liquid crystals are considered as the 4th state of matter. This is so because they are neither solids nor liquids. But they possess the properties of crystal and holds the ability to flow or move like liquid. In their crystalline structure, the molecular orientation resembles like solid. However, these molecules also show movement in various positions. Thereby holding the property of solid as well as liquid. Therefore known as liquid crystal.

This liquid crystal displays the images or characters as the light emitted by the source can be either passed or obstructed by the molecular movement of the crystal. In liquid crystal display, twisted nematic type crystal is basically used. This is so because the molecules of this nematic crystal are somewhat naturally twisted at an angle of about 90°. Also, according to the applied potential, the molecules show untwist at changing degrees.

The figure below represents the structural arrangement of an LCD:

The liquid crystal having a thickness of nearly about 10 to 20 micrometres is placed between two glass sheets. On the inner surface of the two glass sheets, conductors are inserted. These conductors form electrodes. The two electrodes show positive and negative polarity to be applied. The external potential is provided to the display unit with the help of these two electrodes. These are basically formed by materials like indium oxide (IN2O3) and stannic oxide (SnO3).

Let us now understand how an LCD operates.

As we already have the idea that LCD is not an electroluminescent device. This means it does not has light-producing property instead of that it allows light to appear bright or dark by making use of a liquid crystal. Now, let us proceed to understand the operation of LCD.

The figure represented below will help you to have a better understanding of the working of an LCD: 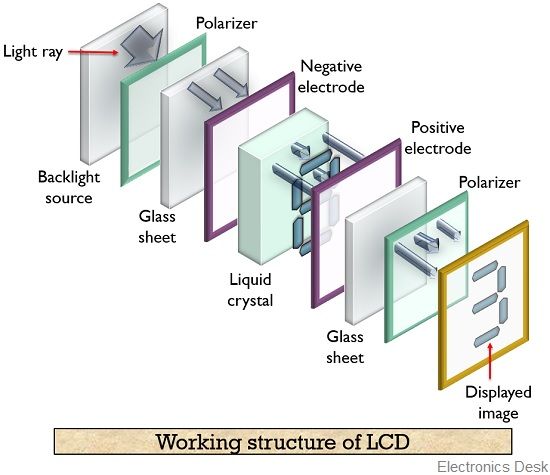 Suppose when a large voltage is applied between the two electrodes. Then this applied voltage causes the twisted mechanism of the molecules to get damaged causing them to operate in a straight manner. Due to this, the vertically polarized light while passing the nematic crystal does not change its polarization. This blocks the vertically polarized light to pass the horizontal polarizer thereby generating a dark pixel at the display. In this way, bright and dark images are generated.

Now the question strikes our mind that how an LCD shows images or characters of different sizes?

The answer to this question is that by applying a controlled voltage between the two electrodes it becomes possible to generate various colour levels on the screen.

As we know that a pixel is nothing but a colour element that is formed by the combination of 3 colours red, green and blue. So, by applying a certain voltage to the electrode the vertically polarized light can be passed through the output polarizer in various amounts. 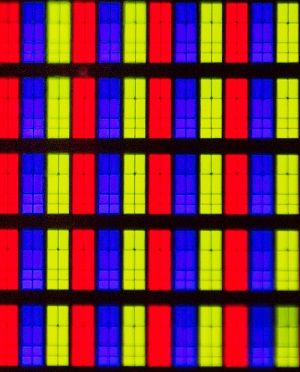 Hence, it can produce various colour levels on the screen of the Liquid crystal display.

Tabular representation of characteristics of LCD 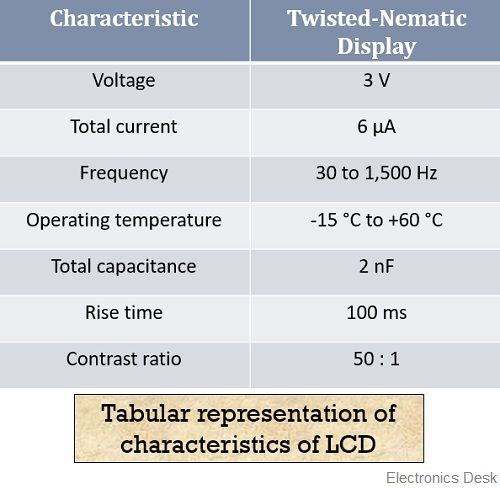