Let’s have a look at the contents to be discussed under this article, then we will move further and discuss other important differences between the diode and transistor.

A diode is a semiconductor device that is formed by the combination of p and n-type semiconductor material. The diode permits current to flow in only single direction. The basic form of the diode is a PN junction diode. However, there exist several types of diodes such as zener diode, tunnel diode, a PIN diode, LED etc.

The figure shown below will help you to understand the structure of the diode more easily: 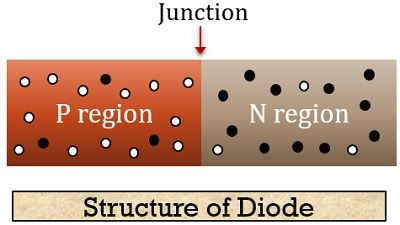 Here, a p-type semiconductor material having majority carrier holes is fused with an n-type semiconductor material having majority carrier electrons. The junction of the two materials forms depletion region that contains neutral atoms. However, its operation is different in an unbiased and biased state. And at the time of providing biasing it can be either forward biased or reverse biased.

When no any potential is applied across its terminals then it is said to be the unbiased state. At the unbiased state flow of carriers take place due to temperature variation. But after a certain point of time, a depletion region is created at the junction because of the recombination of holes and electrons. This depletion region contains neutral atoms. That blocks any further flow of carriers across the junction.

Now we provide biasing to the device. It is noteworthy here that in both forward and reverse applied voltage, the device operates in a different manner.

When a forward voltage is provided then current through the device increases. This is so because majority carriers experience repulsion from the battery terminal. Thereby gaining sufficient energy to surpass the barrier potential of the depletion region.

But in the case of reverse biased condition, the depletion width increases with the increase in applied reverse voltage. Therefore, the current through the device will not show a major increase in it. However, if the reverse applied voltage is increased continuously then it can cause damage to the device.

The transistor comprises 3 regions. It is a device that possesses the ability to allow the flow of current from a region of having high resistance to that of the low resistance. It is a merger of two words transfer and resistor. As it has the ability to transfer the resistance of a device.

The figure below represents the structure of a transistor having a PNP configuration: 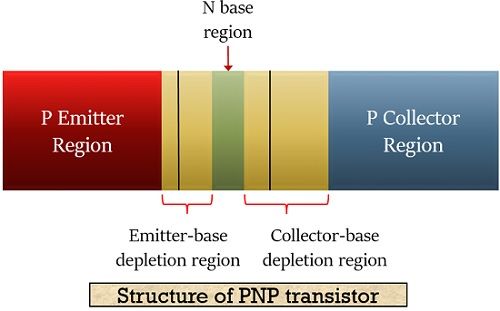 In the transistor, the 3 terminals, emitter, base and collector functions differently. It is noteworthy here that the emitter-base junction is always provided with forward potential. And the collector-base junction is always provided with reverse potential. The electrons injected from the battery terminal reaches the emitter region. From this particular region, majority carriers move to the base region after overcoming thin depletion region at its junction.

Key Differences between Diode and Transistor

So, from the above discussion, we can conclude that a transistor uses the configuration of a diode. As it somewhat resembles like two didoes connection. But we can’t clearly say that it is only two back to back connected diodes. As the 3 terminals of the transistor help to regulate the current flowing through it.