Definition: A heavily doped two-terminal semiconductor device through which electric current flows because of tunneling ( or tunnelling) of electrons is known as Tunnel Diode. It possesses the negative resistance characteristic in which current decreases even when the applied voltage is increased.

Tunneling basically denotes the penetration of electrons through the depletion region. As highly doped diode has a thin depletion region. It works on the principle of Quantum mechanical tunneling. As tunnel diodes show fast switching characteristics thus it finds extensive applications in the field of the microwave.

The symbolic representation of tunnel diode is shown below:

The basic manufacturing material of a tunnel diode is germanium, gallium arsenide or gallium antimonide. It is not formed using silicon as its basic material. This is so because the ratio of maximal value of forward current to valley current in case of silicon is very low. However, gallium arsenide has the maximum value of this ratio thus is widely used.

The structural representation of tunnel diode is shown below: 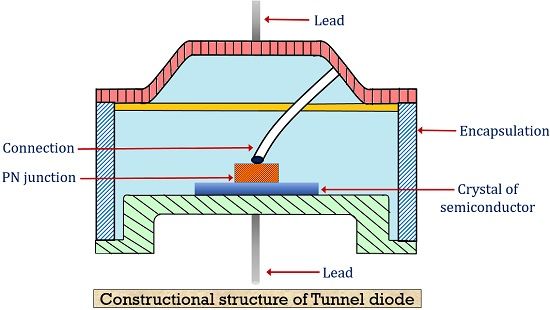 In the tunnel diode, the doping concentration is very high. The concentration of doped impurity in a tunnel diode is thousand times more as compared to any normal diode. This is done so as to have thin depletion region, that is the basis of tunneling effect.

This diode was invented by Dr Leo Esaki in 1957. Hence it is also known as Esaki Diode.

As we have already discussed that the doping concentration in case of tunnel diode is very high. Due to this, the reduced width of the depletion region causes the penetration of charge carriers across the junction even when the carriers do not have enough energy to jump across it.

Let us understand the working of a tunnel diode by considering some conditions.

This is how a tunnel diode works.

The figure below represents the VI characteristics of a tunnel diode: 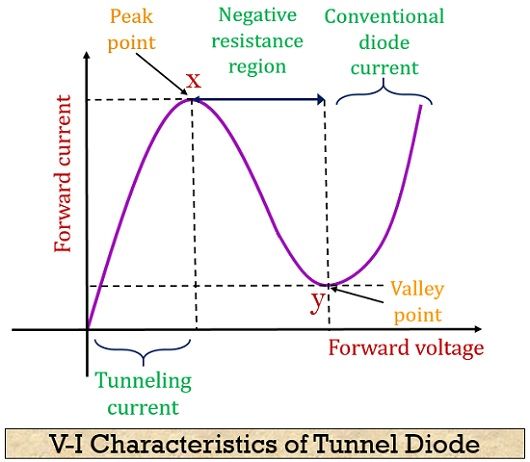 As we discussed already that after reaching the maximum value, the current now starts decreasing. This region of the decrease in current in the graph is specifically termed as a negative resistance region. After this region valley point is achieved which shows the decrement of the current nearly up to zero.

But, as the potential has increased the device now starts behaving as normal junction diode. Thus, the current begins to increase from this particular point.

It is widely used in microwave and high-frequency applications because of its fast response. It can be also used as amplifiers and in oscillator circuits.

Valley current: When tunneling reaches its minimum value with the increase in forward potential. Then the lowest value of tunneling current is the valley point of the device.

So, we can conclude that the device possesses conduction initially due to quantum mechanics. After reaching some specified large forward potential the tunnel diode begins to behave like a normal diode.