Definition: A PNP transistor is an acronym used for a positive-negative-positive transistor. It a mainly a classification of bipolar junction transistor and is a three terminal device consisting of the emitter, base and collector.

Here, majority charge carriers are holes and hence they are responsible for the flow of current through the device.

PNP transistor is a current controlled device. As a small amount of base current is responsible for controlling a large emitter-collector voltage. It is to be noted here that like NPN transistor here also the emitter region is highly doped than the base and collector region.

The figure below shows the symbolic representation of the PNP transistor: 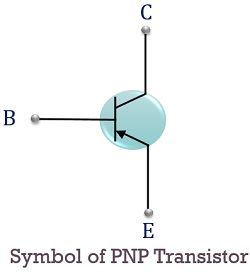 Here, the inward arrow from the emitter to base represents the direction of current conduction.

The figure below shows the structural arrangement of the PNP transistor having 3 regions: 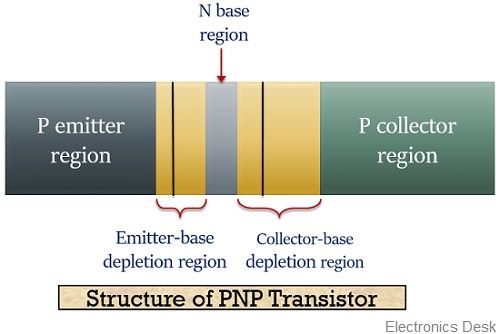 The three regions can be formed by either gaseous diffusion of p-type and n-type impurities on a semiconductor wafer or by an epitaxial method, in which an intrinsic region is grown on the heavily doped substrate of similar material.

The base region is the thinnest among all and hence least doped. The collector region has the largest area among all but is not doped as high as the emitter.

But it is noteworthy here that, we cannot form a transistor by connecting two back to back diodes. Now, the question appears why this is so?

The answer to the above question is that we know that in order to ensure the proper working of the transistor, the doping level of all the 3 regions must be sincerely taken into consideration. But, by connecting two diodes only to have two pn junctions will not give desired transistor operation.

Also, a basic circuit arrangement of the transistor must have a configuration in such a way that emitter-base junction must be forward biased and collector base junction to be reverse biased in order to exhibit diffusion of carriers.

Whereas, in the case of 2 back to back connected diodes, one junction will be forward biased and other will be reverse biased. Hence, diffusion will not take place.

As we are already aware of the fact that a PNP transistor comprises 2 p regions and an n region. Therefore, holes are the majority charge carriers and hence responsible for the current conduction.

Now, we will see how the flow of holes generates an electric current through the transistor. The figure below shows the biasing arrangement of the PNP transistor:

While the collector-base junction is biased with reverse potential as the p region showing collector is connected with the negative terminal of the battery. This biasing arrangement is necessary so as ensure the operation of the device in the active region. 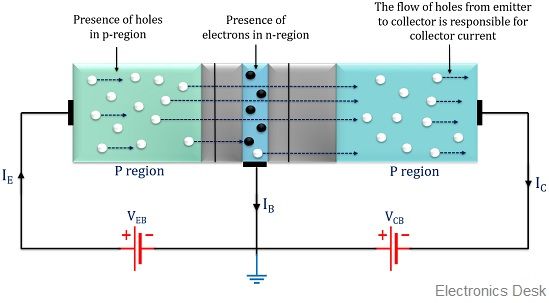 As the emitter region is highly doped so the majority carriers of the p region i.e., holes get repelled by the forward emitter-base voltage. This positive side of the battery applies a repulsive force to the holes and they get sufficient energy and drift across the emitter-base junction and reaches the base region.

Also, there exists a depletion region due to the base-collector junction of the transistor. The holes moving with high velocity due to the repulsive force of battery VBE drift across the collector region.

At the same time, the negative terminal of the battery VCB also attracts the positively charged holes. The movement of holes in this way generates a large collector current through the device.

Hence, the current equation is written as:

In this way, current is generated by the movement of holes in a PNP transistor.

In the operation of the transistor, the efficiency of the emitter and the transport factor plays a vital role.

PNP transistors are widely used in switching and amplifying circuits. These also find applications in Darlington circuits as well as applications related to the field of robotics.

It is given by:

So, from the above discussion, we can conclude that both PNP and NPN are the 2 classifications of BJTs. However, various parameters are present that generates the difference in the operation of the two.