Definition: Thyristor (SCR) is a semiconductor device that performs the action of switching as well as rectification. It is a 4 layer and 3 junction device formed by the combination of alternating p and n-type semiconductor material.

Thyristor is a word formed by the merger of thyratron and transistor. As it exhibits the rectification action of thyratron as well as controllability as that of the transistor. It is a 3 terminal device i.e., anode, cathode, and gate. For the conduction to take place gate trigger pulse is necessary. Unidirectionality is the major property of thyristor. This means that it permits the flow of current in simply one direction.

Though there exists a large classification of the thyristor, however, SCR (Silicon Controlled Rectifier) is considered to be the most crucial member that belongs to the thyristor family. Thus, SCR is generally referred to as a thyristor.

The figure below represents the symbolic representation of a thyristor (SCR): 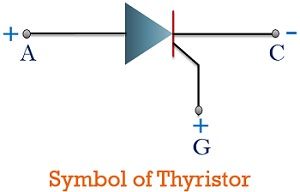 Its symbol is almost similar to a normal diode but the only variation present over here is the presence of a gate terminal that is used to trigger the circuit. As we have already discussed that it is a 3 terminal device, that includes anode terminal, cathode terminal along with the gate terminal.

The devices that come under thyristor family are given below: 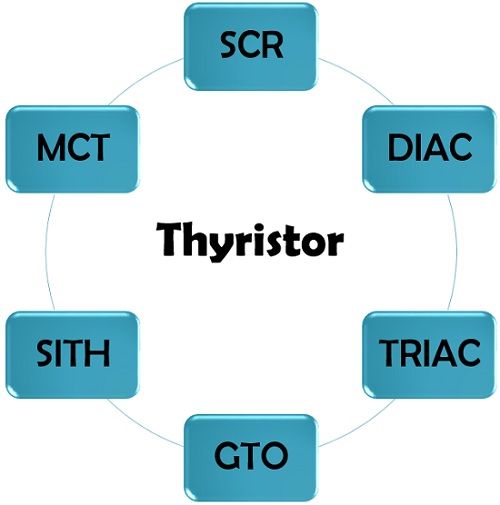 Thyristor is a 4 layer and 3 junction device which is majorly composed of silicon as its basic material. Its construction almost resembles like a normal transistor. But, unlike transistor, it comprises of 4-layer. It is formed by back to back joining of two transistors having different configurations. This means by the combination of one PNP and one NPN transistor.

The figure below represents the structure of thyristor having four layers i.e., P-N-P-N: 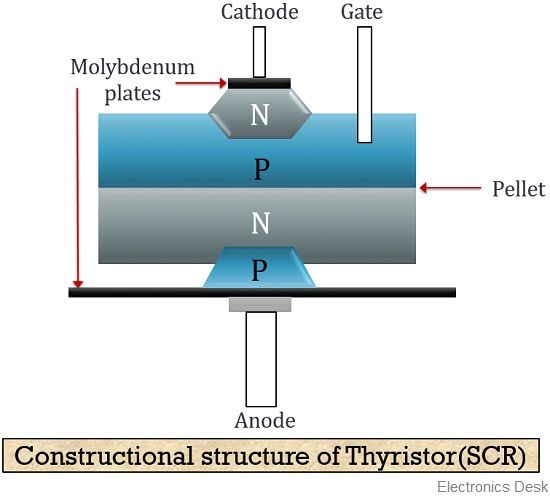 Here, the bottom-most p region represents the anode and the top-most n region shows the cathode terminal. The two regions form a connection with the cathode and anode terminal with the help of molybdenum plates. Hence, we achieve a 4-layer structure comprising of 3 junctions. As we have already discussed that it is a switching device and we know that a switching device must possess a very small leakage current. Also, silicon exhibits a smaller value of leakage current than germanium thus is used in the fabrication of SCR.

A thyristor (SCR) is composed of two p and two n-type of semiconductor material thereby generating the 4-layer structure.

The figure below represents the two transistor analogy or we can say a simplified form of thyristor: 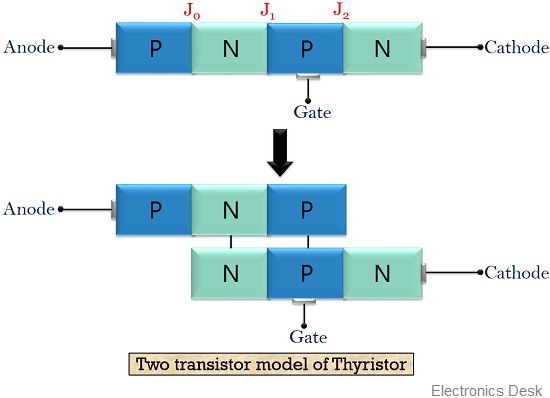 It has majorly 3 modes of the operation let us move further to have a clear idea about how the thyristor operates.

Due to forward biasing junction J0 and J2 allows the movement of carriers. But the intermediate junction J1 because of reverse applied potential generates a wide depletion region and blocks the flow of majority carriers through it. However, a very small leakage current due to the movement of minority carriers flows through the device. But, this current is not enough to drive the circuit. So, despite providing forward voltage the device does not conduct. This is known as forward blocking mode or off mode.

Proceeding further the actual operating mode of thyristor arises when an external gate pulse is provided to it. Here sufficient positive voltage is provided to anode and gate with reference to the cathode. 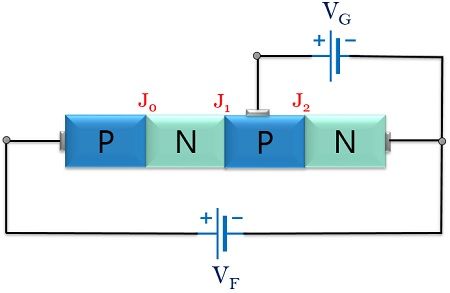 In the above figure, we can clearly see that a forward voltage is provided to the gate terminal with respect to the cathode terminal. Now, in this case, the junction J0, J1 and J2 all comes in forward biased condition. So, the majority carriers start drifting to the collector region of transistor Q1. And as we know that collector of Q1 forms connection with the base of transistor Q2. This base current drives the transistor Q2. Also, the junction is forward biased, so the majority carriers drift to the collector of Q2. In this way, a large current flows through the device. Thus, by applying gate trigger pulse, large electric current flows through the thyristor. This state is termed as forward conduction mode.

Now, even if we remove the gate voltage then also this cumulative action will take place and the current flows through the device once it reaches the minimum value. This minimum current is known as latching current.

Now the question arises then what must be done in order to off the thyristor once it gets on?

So, the answer to the above question is by reducing the anode current up to its lowest value which is called holding current. Thus, a reduction in anode voltage will bring the thyristor again to its forward blocking mode.

The figure below represents the characteristic curve of the thyristor: 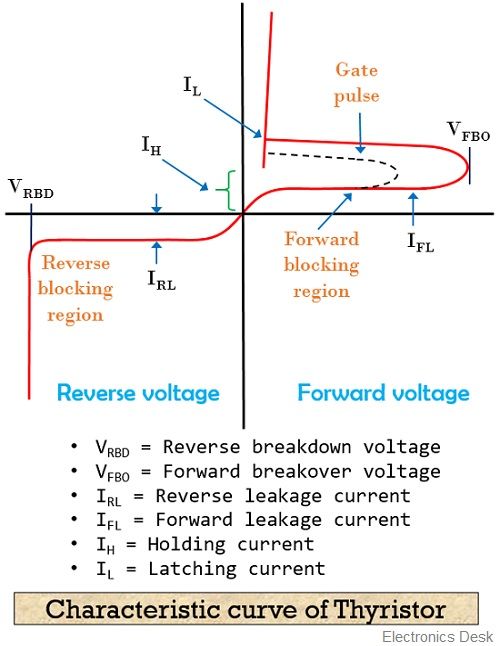 Here, the figure clearly shows the 3 regions of operation of the thyristor. As in the case of forward applied voltage initially when a gate trigger pulse is not applied, then the device operates in forward blocking region. But, as gate trigger pulse is also provided along with forward voltage then it causes a large flow of current through the device. This represents the forward conduction region.

Thyristor because of their switching action and rectifying ability are widely used power semiconductor devices. These are majorly used in relay and phase controlling systems.