Basically, a resistor is used to limit the flow of current through a circuit. However, the operation of the capacitor is somewhat different from that of the resistor as it generally stores the charge and releases the stored charge whenever needed.

You will get to know about other important differences between the two. But before that look at the contents to be discussed under this article.

Its unit is ohms and its symbol is Ω.

The figure below shows the symbolic representation of a resistor:

It is majorly used to limit the charging rate of the capacitor; it also helps to adjust the frequency response of RF circuits. Also, the series combination of resistors acts as a voltage divider for the circuit.

Now, the question arises how it works:

When a resistor is connected in a circuit, then it absorbs the electrical energy that it dissipates later in the form of heat. In this way, a resistor controls the flow of charge.

Consider a resistor R, and I is the current that is flowing through that resistor. Also, V denotes the voltage drop at that particular resistor.

Then, according to ohms’ law:

On the basis of the operating conditions possessed by a resistor. It is classified into two categories:

Fixed resistor: In fixed type resistor the value of the resistance offered by the resistor to the circuit is fixed and is unchangeable.

Variable (adjustable) resistor: Variable resistors are those resistors that offer adjustable resistance value while being connected in any circuit.

A capacitor is also a basic electronic component that has the ability to store an electric charge. It basically does so by making use of externally applied voltage that appears across it.

Here, the figure shows the symbolic representation of a capacitor:

When a potential is provided then an electric field is generated across the capacitor. So, when charges flow through a capacitor then this generated field stores these charges.

It is to be noted here that, it basically stores the electrons thereby storing energy and emits the charges later whenever required.

A capacitor can be considered of 2 conducting plates that are held apart by a dielectric medium. Also, the dielectric material must be a poor electrical conductor or insulator. 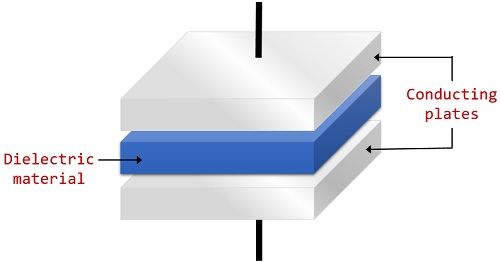 When dc potential is provided across the capacitor. Then the positive and negative charges separately get accumulated at the two sides of the conducting plates.

Due to these deposited charges, the plates become neutrally charged and once the stable state is reached no current is allowed to flow through it. Hence charge is stored in it.

The capacitance of the capacitor is given as:

Like a resistor, a capacitor is also classified into two categories:

Fixed capacitor: Fixed capacitor are those whose capacitance shows fixed value and not does show adjustable behaviour during circuit operation.

Variable capacitor: Like resistors, the capacitance of capacitors also shows adjustable behaviour while connected in any circuit.

Key Differences Between Resistor and Capacitor

So, from the above discussion, we can conclude that both resistor and capacitor are passive components but the two acts differently when employed in any electrical or electronic circuit.