This is the major factor that distinguishes the three. However, some other differences exist between conductor, semiconductor and insulator which we will discuss later. But, before moving to that look at the contents that are to be discussed under this article.

Conductors are the substances that permit easy flow of electric energy through them. More specifically, we can say, it permits easy flow of electron from an atom to the other when a proper electric field is applied to it. These are the material, that possesses the highest conductivity among the three.

Now, the question that strikes our mind is what is conductivity?

So, it the property of a material by which it allows a large amount of current to flow through it. Majorly the movement of electrons inside the material is responsible for its conduction. And these electrons show movement when a certain voltage is applied to it. This voltage applies a force to the electrons due to which it easily starts moving from valence band to conduction band.

Thus, these are good conductors of electricity.

Let us have a look at the energy level diagram of conductors: 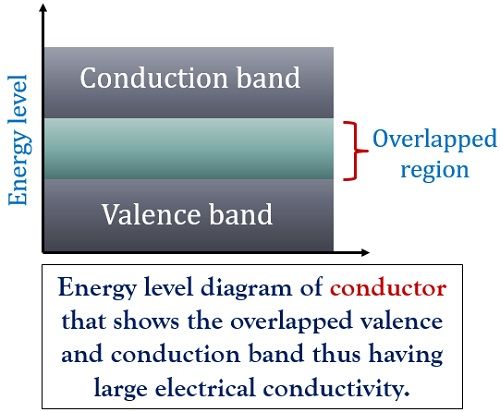 As the two bands i.e., valence band and conduction band are overlapped with each other. Thus when some certain voltage is applied to such materials, then electrons easily moves from valence band to conduction band due to the influence of the electric field. This movement of charge carriers generates a large electric current through the device.

When the temperature is absolute zero, then no any movement of charge carriers takes place in case of semiconductors. In such case, it behaves as insulators. But in order to have a considerable flow of charge carriers to take place certain potential must be provided to them that can excite the electrons to another energy level. Thereby, generating electric current.

Let us have a look at the energy level diagram of semiconductors:

As we can see in the figure above that, the energy band gap between the valence band and conduction band is present. Though this energy difference was not present in the previously discussed case of conductors.

Insulators are the materials that are not good conductors of electric charges. As in the case of insulators, current cannot flow easily through them. The energy band gap is so high in case of insulators that even applied potential does not excite the electrons from valence band to conduction band. But as these possess negative temperature coefficient of resistance hence with the increase in temperature the resistance offered by it decreases.

Let us have a look at the energy level diagram of an insulator: 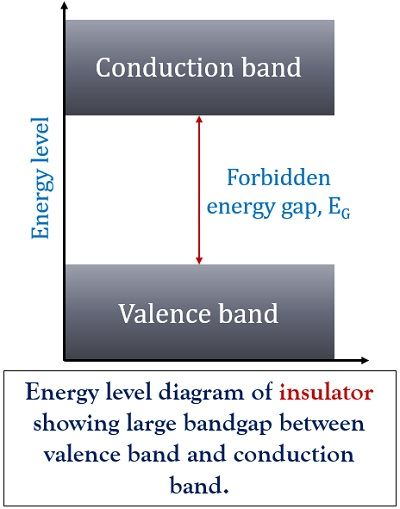 However, there exists a breakdown case of insulating materials in which, when an extremely high temperature is provided or supplied then it causes the electrons to overcome the large energy difference thereby moving to the conduction band.

2 thoughts on “Difference Between Conductor, Semiconductor and Insulator”