On the contrary, a thyristor is a 4-layer device that needs an only single triggering pulse to initiate and maintain conduction.

In the upcoming section of this article, you will get an idea about other important differences between the two. But, before that have a look at the contents to be discussed here.

A transistor is a device made of semiconductor material that consists of 3 layers and 3 terminals. The word transistor is a merger of two different words that are transfer and resistor. This simply defines the operation of the transistor. It is a device that transfers the resistance from one region to another in order to ensure conduction, thereby amplifying the signal.

Basically, silicon and germanium are the semiconductor materials that are used for the fabrication of the transistor.

Here, we can see the symbolic representation of the transistor: 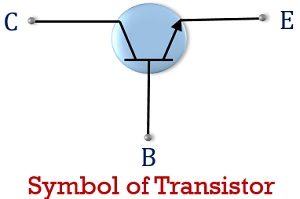 Transistors are majorly classified as NPN and PNP transistors. This classification totally depends on the type of material used and the associated majority charge carriers responsible for conduction.

The figure below represents the NPN transistor with biasing arrangement:

Here, we can clearly see that a transistor is a 2 pn junction device. The three terminals of the transistor are emitter, base and collector.

When proper biasing is provided to the device then the majority charge carriers flow from an end to another that resultantly causes conduction to take place.

As we have considered here an NPN transistor then the majority charge carriers responsible for the flow of current over here are electrons.

So, when a forward voltage is applied at the emitter-base junction of the transistor then electrons from the emitter region drifts across the base region after overcoming the barrier potential of that junction.

Due to this movement conduction takes place through the device and current flows from collector to emitter (opposite to the direction of flow of electrons) through the transistor.

It is basically an alternate arrangement of p and n-type semiconductor materials; this is clearly represented in the figure below:

Also, the figure below shows the symbolic representation of thyristor: 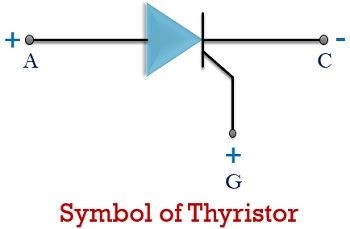 It is necessary to apply forward gate voltage in order to start and maintain conduction through the thyristor.

The figure below represents the biasing arrangement of thyristor: 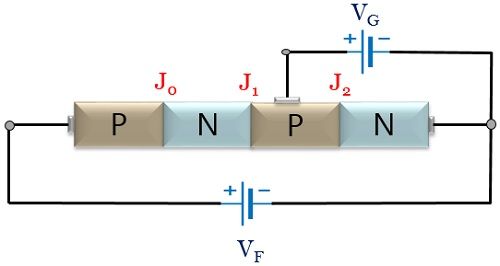 Here, a forward voltage is provided to anode wrt cathode. Also, the gate terminal is forward biased with respect to the cathode.

This causes all the three junctions to be forward biased so, majority carriers start drifting from emitter to the collector region. If the gate potential is not applied, then the intermediate junction will remain in reverse biased condition and block the flow of carriers.

Once, the applied gate potential forward biases the middle junction then it will permit continuous flow of current. Even after removal of the gate triggering pulse the device continues to conduct due to the cummulative action.

Key Differences Between Transistor and Thyristor

So, from the above discussion, we can conclude that both transistor and thyristor have their own set of benefits in their respective applications. But thyristor somewhat exhibits better reliability than that of the transistor.

1 thought on “Difference Between Transistor and Thyristor”