PIC is an abbreviation used for Peripheral Interface Controller. PIC microcontroller is the smallest microcontroller in the world and are programmed to execute large number of operations. These were initially designed to support PDP (programmed data processor) computers, for controlling the peripheral devices. It is based on RISC architecture.

We know a microcontroller is nothing but a combination of processor, memory and peripherals in a single chip. In a similar way PIC microcontroller consists of data RAM with some hundred bytes of ROM for storing the desired program, some I/O ports, one timer on a single chip having 8 pins.

As it was designed to perform simple control applications thus called peripheral interface controller. But now-a-days it is commonly known as programmable intelligent computer.

We know that basically the components of the microcontroller are embedded in one chip. Thus further addition of external memory, I/O port or timers to it is not achievable. However, this property is also utilized in a way that microcontrollers are used in various applications.

The figure below shows the architectural representation of PIC microcontroller: 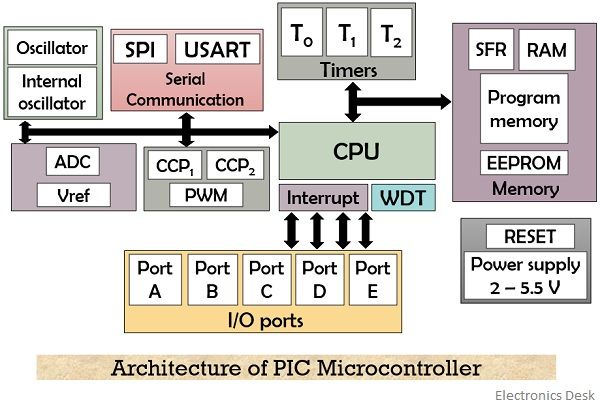 As we have already discussed that it consists of a processor, I/O ports, timers, memory organization etc. in a single chip. So, let us move further and understand the operation of each component of the PIC microcontroller.