As it is an 8-bit microcontroller thus has 8-bit data bus, 16-bit address bus. Along with that, it holds 4 KB ROM with 128 bytes RAM. We will discuss the complete architecture of 8051 microcontrollers. But before that, see the contents under this article.

What a Microcontroller is?

A microcontroller is an integrated chip designed under Very Large Scale Integration technique that consists of a processor with other peripheral units like memory, I/O port, timer, decoder, ADC etc. A microcontroller is basically designed in such a way that all the working peripherals are embedded in a single chip with the processor.

Any programmable device holds a processor, memory, I/O ports and timer within it. But a microcontroller contains all these components embedded in a single chip. This single-chip manages the overall operation of the device.

We have already discussed microprocessors in our previous article. A microprocessor simply contains a CPU that processes the operations with the help of other peripheral units. Microprocessors are used where huge space is present to inbuilt a large motherboard like in PCs.

However, microcontrollers are used where programming is to be performed on the smallest tiny space present. A microcontroller holds separate memory locations for both data and program.

Let us now have a detailed idea about 8051 microcontrollers.

The figure below represents the architectural block diagram of 8051 microcontroller: 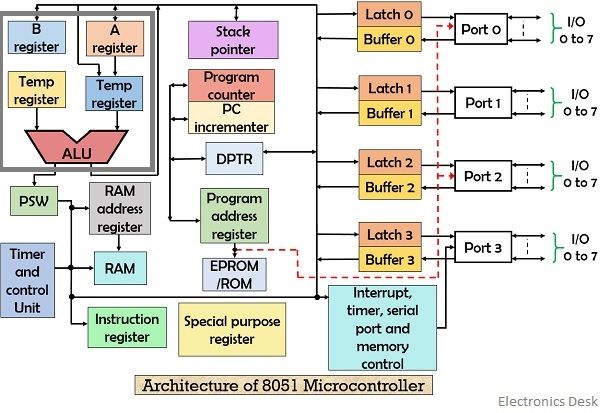 1. Central processing unit (CPU): 8051 uses the 8-bit processor. This unit carries out the operation on 8-bit data. A processor is the heart of microcontroller. As the execution of the program stored in the memory is performed by the processor.

The unit performs arithmetic and logical operations on 8-bit data as it has ALU, with internal registers and program counters.

Several logical operations are performed by the ALU according to the program stored in the memory.

The processor of 8051 microcontrollers possesses a special feature by which it can process single bit or 8-bit data. This simply means that it has the ability to access each single bit data either to clear, set or move etc. for any logical computation.

3. Input/ Output port: 8051 consists of 4 parallel ports of 8 bit each thereby providing 32 input-output pins. All the 4 ports function bidirectionally i.e., either input or output according to the software control.

4. Timer and Control Unit: Timers are used to create a time gap or delay between 2 events. 8051 microcontroller consists of 2 timers of 16 bit each by which the system can produce two delays simultaneously in order to generate the appropriate delay.

The timer produces the delay according to the demand of the processor and sends the signal to the processor once the respective delay gets produced.

Though the processor can also generate a delay according to the need of the system. But this will lead to keep the processor busy all the time as it will not do any other operation in that particular time duration. So, the presence of timer in the microcontroller, allows the processor to be free in order to execute other operations.

Along with these units, the microcontroller chip also includes data pointer, program counter, stack and stack pointer, temporary registers, instruction registers with latches and buffers for the I/O ports.

So, this is all about the basic architecture and characteristics of 8051 microcontrollers.