Definition: A microprocessor is an IC that executes arithmetic and logical functions that are defined by a program inside the system. Also, a computer system that is employed with a microprocessor is termed as a microcomputer. It is basically an LSI i.e., large scale integration chip.

Each and everything in a processor is stored in the form of 0’s and 1’s. As it is designed to operate in binary digits i.e., bits.

The instructions that are performed by a microprocessor is in the form of bits, hence, is not in human understandable format. This machine level language is only understood by the microprocessor inside a system.

So, it is then converted into assembly level language for the execution of the instruction.

A program is stored in the memory according to which the desired logic function is performed. This program inside the memory is nothing but the set of instructions that tells the processor about the task to be performed.

The microprocessor was introduced in 1971 by Intel Corporation, called Intel 4004. Basically, that was the first time when a processor was manufactured on a single chip. That processor was capable of performing arithmetic and logical operations like addition, subtraction etc.

Also, it had the ability to perform controlling of the functions for executing the programs.

Further, with the coming time, an improved version of the 4-bit microprocessor was again introduced by Intel, called 4040, followed by many other 4 bits microprocessor.

In 1973, intel again invented a microprocessor that can be operated on the 8-bit word, this was called 8008. But further, its advancement was introduced by Intel, called 8080.

But, this was not the end as 32-bit and 64-bit microprocessors were also developed. Basically, the enhancement of the different versions of the microprocessors is characterized by the improvement in architecture as well as its instruction set.

Microprocessor as a CPU

A microprocessor can be considered as the fundamental component of a computer.

The figure below represents the traditional block diagram of computer: 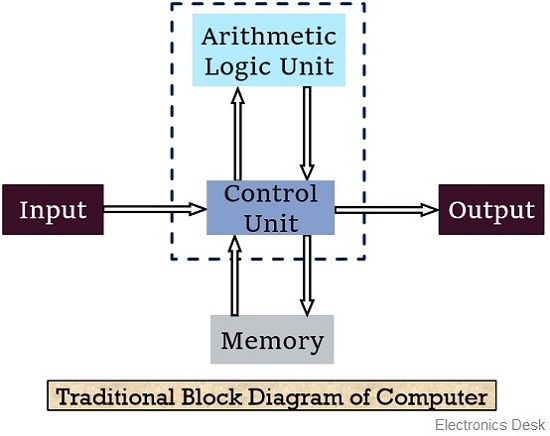 As we know that a computer system mainly consists of 4 components: an input device, output device, memory unit and a CPU having ALU and CU. In 1960s various boards were used for the designing of a CPU with discrete components.

But with the origination of the integrated circuit, the CPU can be built on a single chip, this is known as a microprocessor.

Let us now have a look at the simplified block diagram of a computer having microprocessor as a CPU: 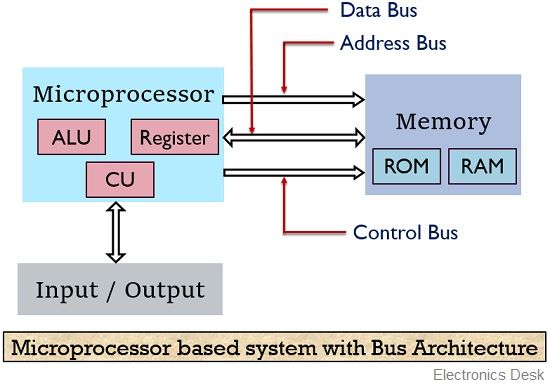 Input and output devices of the computer system are used to take the data for the user and generate the desired result respectively after the data is processed by the microprocessor. These are also called peripherals.

Input devices may include a keyboard for a computer system, ADC etc.

Memory unit inside a computer store the data and program and it does not perform any operation. So, the files stored in the memory can be either program files or data files.

After the execution of the desired program, the result is either displayed at the output unit or stored at the desired memory locations for further uses.

This primary memory is composed of RAM and ROM. Here, ROM holds that program that is not allowed to be changed.

The operation of a microprocessor includes 3 steps. These are explained below:

This fetching of information from memory to processor is done by the data bus.

It is noteworthy in case of computer systems that memory and input-output devices do not control each other. The data given by the user is converted into machine level language and is stored at the memory for further accessing.

This overall process inside a microprocessor is known as the instruction cycle. And the accessing of data from the different units is done only through the data bus.

The system bus is nothing more than a set of lines that are used to communicate between the processor, memory unit and peripherals. It basically acts as the medium to transmit the data to different units.

In a particular span of time, the microprocessor communicates with only a single peripheral. And the time controlling for this is provided by the control unit of the processor.

Now, a question arises that how information gets travelled over the bus?

So, as we already know that information is sent in the form of 0 and 1. Thus, for transmitting the information an electronic switch is used that continuously fluctuates between VCC and ground. Thereby, transmitting millions of bits in just some seconds.

A system bus is basically classified into 3 categories:

So, in this article, we have discussed the basic operation performed by a microprocessor inside a system. Further, in the upcoming articles, we will discuss the architecture of different microprocessors.