It is also known as a priority interrupt controller and was designed by Intel to increase the interrupt handling ability of the microprocessor. An 8259 PIC never services an interrupt; it simply forwards the interrupt to the processor for the execution of interrupt service routine.

We know whenever an interrupt occurs then the microprocessor suspends the current program and switches to the Interrupt Service Routine (ISR).

Among all these, only INTR is a non-vectored type of interrupt, rest are vectored interrupts.

But in case of non-vectored interrupts, the processor has to reach the ISR but it does not hold the address of ISR. So, in this case, the interrupt generating device provides the ISR address to the microprocessor.

An 8085 has 5 major interrupts for which a fixed number of lines are present in the chip. But there are many devices connected to a processor. So, for such a case the processor must have more number of lines to handle several interrupts.

So, to overcome this problem 8259 PIC chip is used. 8259 allows the combining of multiple interrupts and providing them to the processor based on priority through a common line.

Therefore, 8259 is used to combine various interrupts which are non-vectored in nature.

Also, suppose in some way or the other, two devices generate interrupt simultaneously through a common line without the involvement of 8259.

So, the processor gets two INTR signals at the same time but how does the processor get to know that from where the interrupt is generating and where to send the INTA in order to have the ISR address.

The figure below shows the architectural representation of 8259 programmable interrupt controller: 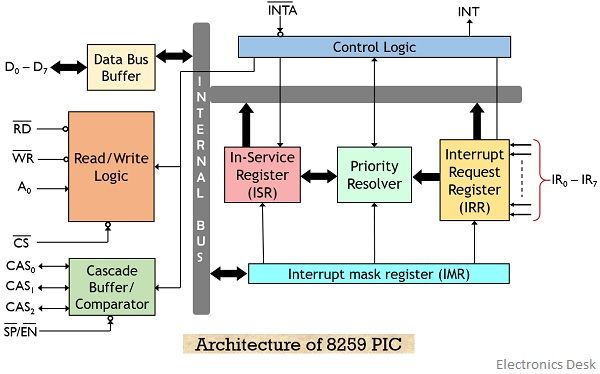 It has an 8-bit of data bus. As we have already discussed that 8259 never services the interrupt, it simply forwards the interrupts to the microprocessor.

Thus, the above architecture has different units that combinely functions to increase the interrupts handled by the processor.

Let us understand the operation performed by each unit in detail:

1. Data Bus Buffer: 8259 has tri-stated bidirectional 8-bit data bus buffer (i.e., D0 to D7) that interfaces with the internal bus of the processor. The 8085 microprocessor sends/ receives, control or status words to/ from the 8259 using data bus buffer.

RD, WR, A0 and CS are the pins that are associated with this unit. Basically, these pins are used by the processor for read and write operations.

A low signal at CS i.e., chip select shows that now the communication has been set up between the processor and 8259.

3. Control Logic: This unit is the heart of the architecture of 8259. It controls the overall operation of the system by sending the INTR signal to the processor whenever an interrupt request is generated.

5. Priority Resolver: This logic unit decides that among all the interrupt request present in the IRR which holds the highest priority and needs to be executed first.

Suppose at the time of servicing an interrupt, another incoming interrupt request gets generated then that request will be ignored as the one in-service is holding the highest priority.

But in case the incoming request has greater priority than the one which is being in current execution then that respective bit will be set in ISR and INTR signal is sent to the microprocessor.

This simply means that only the interrupt holding the highest priority will be forwarded by the 8259 to the processor.

6. In-service register: Here the name of the unit is itself indicating the operation performed by it. This register unit stores the interrupts which are currently being executed by the processor.

The priority resolver sets each bit of ISR and after getting interrupt word command by the processor, the bits get reset. As the processor holds the ability to directly read the status of in-service register.

8. Cascade buffer/comparator: As we have already discussed that by cascading multiple 8259, the number of interrupts handled by 8259 can be expanded up to 64. The unit allows the comparison of IDs of different 8259s cascaded together.

It permits the operation of the system in two modes: master mode and slave mode.

In the master mode of operation, it acts as a cascaded buffer. Whereas in slave mode, this unit acts as a comparator.

Among the various cascaded 8259, one 8259 directly handles the interrupts by forming a connection with the processor and it is known to be master 8259. While the other 8259s that interrupts the master 8259 are known as slave 8259.

Each of the 8259s can be separately programmed as all of them holds a specific address. The cascading pins of the master 8259, CAS0, CAS1 and CAS2 forms connection with the corresponding pins of slave 8259s.

For the slave devices, these pins act as input pins while for a master device these acts as output pins. An active-low signal at SP/EN for a device shows that it is operating in slave mode.

In this way, a programmable interrupt controller operates.