RFID Technology is an abbreviation used for Radio Frequency IDentification technology. RFID technology is a unique mode that offers automatic identification and tracking of objects or entities by making use of radio-frequency waves.

This technology is known to be a combination of radio broadcast technology and radar. In the 1980s, it has gained immense popularity in commercial implementation.

RFID is a wireless approach that is free from necessity related to line of sight communication because barcodes are the ones that necessarily require line of sight interaction. Basically, in RFID technology, the data possess changeability i.e., can be updated or locked. Through this technology, one can uniquely detect tagged objects or people. It is considered to be somewhat cost-effective.

There are two major components on which the RFID technology is built namely RFID reader and RFID tags. However, the host computer is also an important part of the RFID operation. 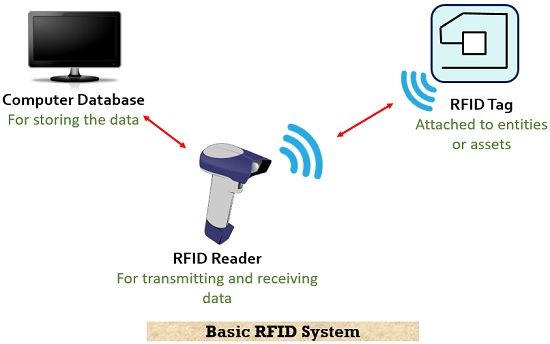 The reader contains one or more antennas along with an electronic module. Through the antennas communication in wireless mode can be built as it is responsible for emitting radio waves and receiving signals from the RFID tags. The electronic module present within the reader unit helps in relaying messages between the host computer and the RFID tag. The electronic module is considered to be an important part of the RFID reader as it is responsible for user authentication as well as encryption/ decryption. It also performs anti-collision that facilitates a single reader to communicate with multiple tags simultaneously.

The tag is the unit that is attached to the tracking object and has semiconductor chips with small antennas. The signal transmitted by the reader is sensed by the antenna of the tags thereby facilitating wireless identification. These are used for information storage purposes. It can be paper labels that are stuck to packaging boxes or can be mounted on the containers like plastic or glass.

RFID tags are mainly classified as active tags or passive tags. The tags that are powered by miniature batteries are the active tags. These offer an operation range in meters. However, the ones that are not powered by the battery in spite uses the power from the reader to operate are known as passive tags. Basically, in these tags, the reader at the distant location induces power within the tag. As here reader powers these tags thus, the operating range offers lies between 2mm to few meters.

We have already discussed that RFID technology works on radio waves. The approach used by RFID systems is such that the reader sends the radio waves on a continuous basis and if the object is present in the range of incoming signals from the reader then the tag sends a feedback signal to the reader. This transmitted signal contains information regarding the location of the tag along with other necessary information.

Recently we have seen that there are two elements of an RFID system, the RFID reader and the RFID tag. Let us check in brief, the components that constitute the reader and the tag.

RFID reader: The figure given below represents the components of the reader. 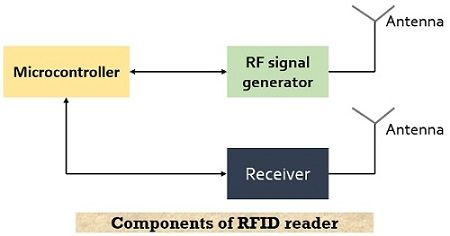 The signal generator is responsible for generating the radio frequency signal, which is transmitted through the antenna. Also, the same unit has a receiver that receives the incoming signals from the tags. The microcontrollers are used for the purpose of processing the information.

RFID tag: In the below-given figure one can see the components involved in the tag.

The transponder present in the tag receives the incoming radio waves from the reader and retransmits the feedback signal back to the reader. Here we can see that a rectifier circuit is present which is mainly used in the case of passive tags which take the energy for its operation from the incoming electromagnetic wave. Thus, in such a case, the rectifier circuit helps in storing the energy. This stored energy is provided to the controller and memory element for the operation.

The frequency of operation of RFID technology is mainly classified as: 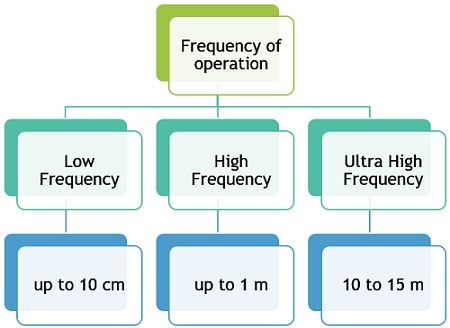 It is based on inductive coupling. We know that the LF and HF frequency range of operation offers a coverage range of about 10 cm to 1m. It is utilized in cases where the reader and tag are present in close proximity to each other. Hence operates under inductive coupling.

Here near field coupling takes place whose basis of operation is Faraday’s law of magnetic induction. 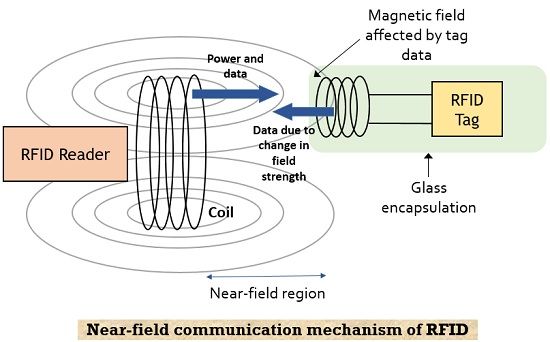 In this method the feedback signal sent back to the reader undergoes load modulation. This is so because, due to the induced voltage, the current will begin to flow through the load. This flowing current will give rise to the magnetic field and the magnetic field of the tag will oppose the field of the reader. Hence, the coil of the reader can detect the change in current and this change will be proportional to the load at the coil of the tag. Due to this reason, it is called load modulation.

In this way, the reader will be able to recover the signal sent by the tag by observing the change in current through the coil of the reader. More simply, according to the data within the tag load undergoes switching which is read by the reader.

This is considered to be a simple method that is used in passive RFID systems. 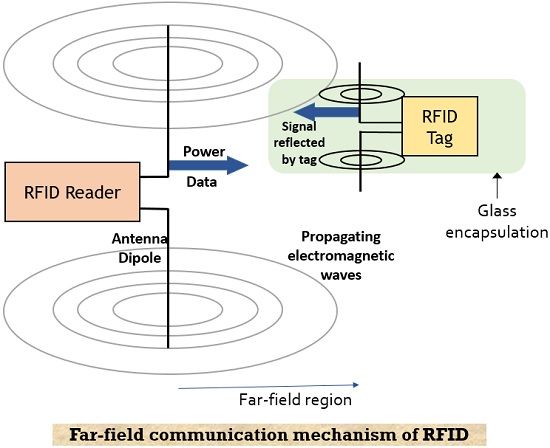 Basically, the energy received by the tag appears as the alternating potential difference across the antenna. The diode in the rectifier circuit rectifies the potential and is stored in the capacitor in order to power the circuit. Here, the radio waves sent from the reader are backscattered by the tag and the intensity of the backscattered signal is dependent on the load matching of the coil.

In case the load is properly matched, the intensity of the backscattered signal will be high whereas in case of improper matching the intensity will be low. Thus, in this case, we can say that with a change in antenna impedance the reflected energy will vary.

It is to be noted here that the load condition of the tag varies according to the data stored within the memory of the tag. And as we have already discussed that the distance between reader and tag is more therefore, the sent signal must be strong enough so that it must be retrieved by the reader.

It offers a wide range of applications which are as follows: