8251 USART is a universal synchronous and asynchronous controller designed by Intel basically to facilitate communication.

USART stands for Universal Synchronous and Asynchronous Receiver Transmitter and functions as an intermediary that allows serial and parallel communication between the microprocessor and the peripheral devices.

Thus the approach of transmitting data parallelly to long distance is cost-ineffective.

So, to reduce the overall cost of the system despite parallel data communication between the processor and peripheral devices, the serial transfer of data is permitted.

In a similar way, the serial data from the peripheral devices is converted by the USART into the parallel form so that it can be accepted by the processor.

Also, it allows both synchronous and asynchronous transmission and reception thus is called so.

Architecture and Working of 8251 USART

The figure below shows the architectural representation of 8251: 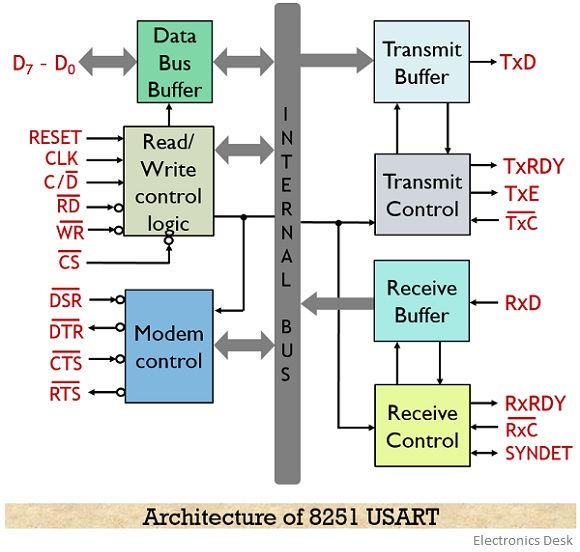 Let us now understand the operation performed by each unit in detail:

1. Data Bus Buffer: It basically interfaces the 8251 with the internal system buses of the processor.

The data bus buffer has 8-bit bidirectional data bus that allows the transfer of data bytes, status or command word between the processor and external devices.

The control formats for system operation is stored in control and command word registers present in the read/write logic unit.

The signals handled by the read/write control logic unit are discussed below:

3. Transmit Buffer: This unit is used to change the parallel data received from the CPU into serial data by inserting the necessary framing information. Once the data is transformed into serial form, then in order to transmit it to the external devices, it is provided to the TxD pin of the 8251.

This unit consists of 2 registers. These are as follows:

But in case of synchronous transmission, the clock signal is used thus there exists no need of adding additional bits expect the parity bit (if required).

4. Transmit Control: As the name of the unit is itself indicating that it is controlling the transmission action. And it does so by accepting and sending signals both externally and internally.

The various control signal generated by this unit are as given below:

5. Receive Buffer: This unit takes the serial data from the external devices, changes the serial data into the parallel form so that it can be accepted by the processor. It consists of 2 registers: receiver input register and buffer register.

When the external device is ready to send the data to the 8251 then it sends a low signal to the RxD line of the 8251. In asynchronous mode, once 8251 receives a low signal it considers that signal as start bit of the data.

So, once the start bit is successfully accepted by 8251, then it also receives the whole data bits in serial form along with parity and stop bits.

Once the data is received by the receiver input register then it converts the data bits in parallel form and sends it to the receiver buffer register.

This unit controls the operation of the receiver buffer. It manages the data reception, along with that it also detects the presence of false start bit, error in parity bit, framing errors etc.

7. Modem Control: This unit of 8251 holds input and output control signals that simplify the operation of the whole system. The control circuitry for handing various signals is provided by the modem control unit. It includes DTS, RTS, DTR and CTS.

These are all active low signals.

This is all about the architectural working of 8251 USART.