Interrupts are the signals that are generally produced by the devices externally connected to the microprocessor, requesting for the services. Whenever an interrupt request is generated in the system then it must not be neglected and be acknowledged as soon as possible.

Suppose the processor is executing an instruction and a keyboard key is pressed. Then at this time, the processor gets to know that the external device keyword is requesting its services.

In this article, we will discuss the interrupts of 8085 microprocessor. 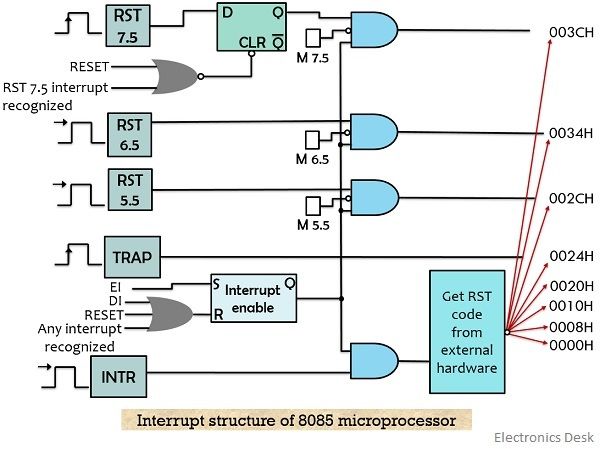 Initially, there was an approach called polling used in the microprocessor. Now the question arises,

In polling or polled approach, the software inside the microprocessor checks each peripheral device according to the priority that whether any one of them needs the processor services.

In polling, a program inside the processor checks the I/O ports A, B and C for the need of service. As we have already said that the ports are sequentially checked on the basis of priority. So, one after the other each of the peripheral devices are checked. But the priority assigned to each of the I/O devices can be changed and thus the polling routine.

However, this will lead to unnecessary processor utilization when no external request for the processor is generated. Thereby causing a great reduction in the overall throughput of the system. So, to have an efficient system, another desirable technique was taken into consideration by which whenever a device needs service of the processor, then it will send a signal to it in order to request for its services. These signals are nothing but the interrupts.

8085 supports multilevel interrupts. So, the interrupts are classified as: 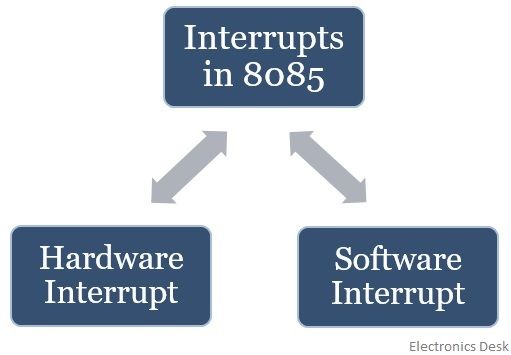 Let us now move further and understand the different types of hardware and software interrupts.

The hardware interrupts of 8085 are as follows: 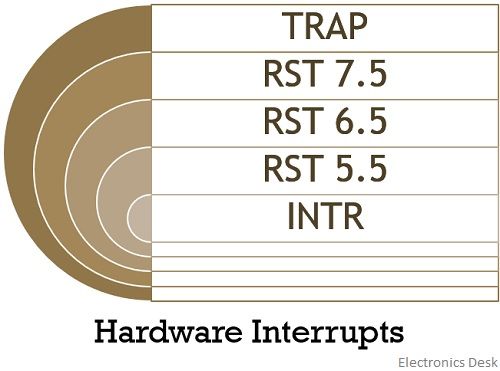 Due to non-maskable nature, a TRAP signal at the pin can be cleared only in two ways:

So, basically whenever a high signal is received at the TRAP pin of 8085 then the processor generates an acknowledging signal by clearing the flip flops. So, after this interrupt is acknowledged then the processor stores the return address of the program in current execution in the stack. Also at the same time, the Program counter is loaded with the fixed vectored address of the TRAP interrupt in order to execute the ISR operation.

RST 7.5: This interrupt holds the second-highest priority among these interrupts and is maskable in nature. If the mask bit of the interrupt is low, then this shows that the processor is not masking the interrupt. So further the processor loads the address of the current operation in the stack and loads the vector address of RST 7.5 i.e., 003CH onto the PC. Thus, 8085 starts executing the instruction in the memory location in order to service the routine. 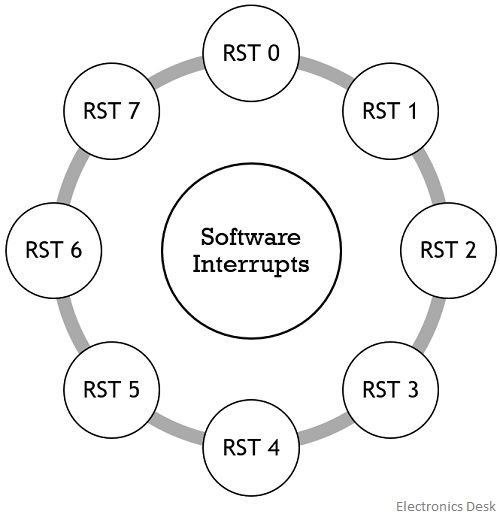 Basically whenever a software interrupt is generated then its vector address is calculated by:

Suppose we have to calculate vector address of RST 4 then, it will be

So, this is all about the interrupts of 8085 microprocessor.