There exist some other crucial differences between the two which we will be going to discuss with the help of comparison chart. But before that have a look at the contents given below that are to be discussed under this article.

A method of transmitting a message in the form of the continuous time signal is known as analog communication. The signal can be an image, audio or video message that must be transmitted from an end to another.

Let’s have a look at the pictorial representation of an analog signal:

The figure below represents the analog communication system: 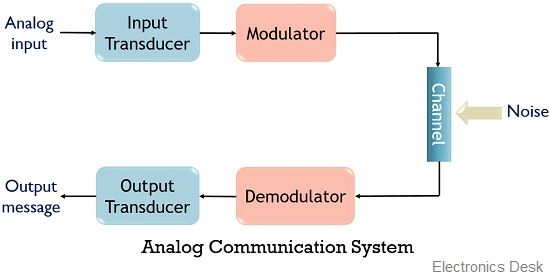 The analog signal containing information is first provided to the input transducer where the analog message signal is first converted into an equivalent electrical signal.

This signal is then provided to the modulator circuit where modulation of the applied signal is performed in order to have long distance and proper signal transmission. The modulated signal is then transmitted through the communication channel where noise components also get added in it.

A way of communication in which the message is transmitted in the form of digital pulses or non-continuous form is known as digital communication. Here, the information is sent in digital format.

Let us see the pictorial representation of a digital signal:

The figure below represents the digital communication system: 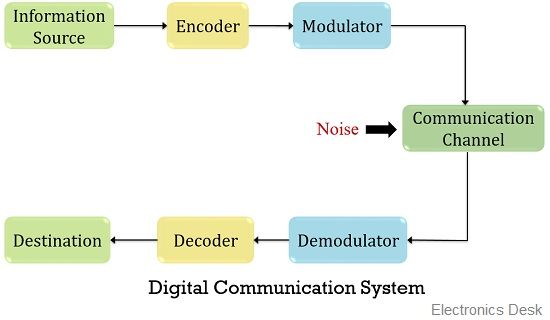 Here, the above figure clearly represents a digital communication system comprising of information source along with source encoder and a modulator. At the other end of the communication channel, a source decoder and demodulator is present.

A discrete information source generates a message signal that does not show continuous variation with time. This signal is provided to the source encoder. This unit provides a digitized message signal i.e., in the form of a binary sequence.

It finds applications majorly in television broadcasting and radio broadcasting. Also, at the time of telephonic conversion, analog communication is taken into consideration.

So, from the above discussion, we can conclude that an analog signal is nothing but a composition of continuous values. However, a digital signal is a composition of discrete pulses. Both find applications in different fields according to the properties exhibited by them.

1 thought on “Difference Between Analog and Digital Communication”