Definition: Noise in a communication system is basically undesirable or unwanted signals that get randomly added to the actual information carrying signal. Resultantly, causes disturbances in the original signal being transmitted from an end to another.

The presence of noise in the system causes interference in the signal being transmitted and this ultimately causes errors in the communication system.

Practically, the addition of noise over the information carrying signal is an unavoidable phenomenon. And this interference automatically hinders the quality of the signal being transmitted.

Due to the reduction in the quality of signal the receiver experiences difficulty in demodulating the transmitted signal. This eventually reduces system efficiency.

Now, the question arises how can we distinguish the various types of noise signals. So let us move further to understand the types of noise.

Types of Noise in Communication System

Noise in the communication system is mainly classified on the basis of the source that generates that noise.

So, on the basis of source noise in the communication channel are of 2 types: 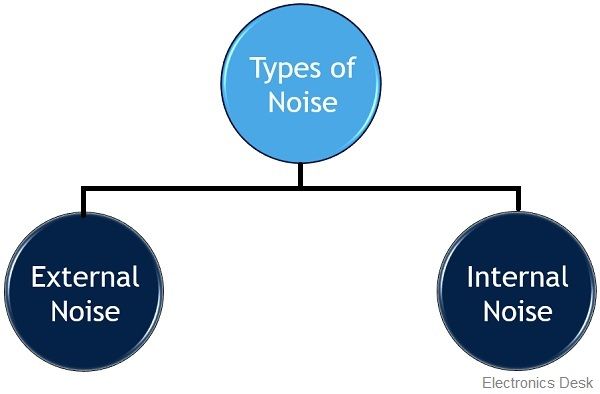 Natural noise gets generated due to either natural phenomenon or atmospheric actions like solar flares, radiation in space, electronic storms etc.

It is further classified into atmospheric and extraterrestrial noise.

Hence the receiver at the other end collects both message as well as spurious signals.

Solar Noise: Solar noise is generated by the sun. As Sun is a large body with extremely high temperature thus it emits or releases high electrical energy in noise form over a broad frequency range.

However, the intensity of the produced noise signal changes timely. This is so because the temperature change of the sun follows 11 years of the life cycle. Hence large electrical disturbances occur after the period of every 11 years. While at other years the noise level is comparatively low.

Not only the stars but the galaxies and other virtual point sources like quasars and pulsars in the outer space produces cosmic noise.

This type of extrinsic noise is also known as industrial noise. These are basically the electrical noise that gets produced by the wear and tear of the circuit being used. The source of man-made noise is electric motors, high current circuits, florescent lights switch gears etc.

When these machines operate, arc discharge takes place and this discharge generates noise signals in the communication system.

The frequency spectrum of man-made noise lies between 1 MHz to 600 MHz.

2  Internal Noise is the fundamental noise that gets generated by the electronic equipment involved in the system itself. They are called so because these are nothing but an integral part of the system.

Proper designing of the communication system can reduce or overcome noise due to internal sources.

Internal Noise is classified as follows:

As we already know that an electrical signal is transmitted through a channel by the help of conductors. So, the electrons present in the conductors move randomly.

Due to this a possibility also exist that at one end the number of free electrons will be comparatively higher than at the other end.

This non-uniform distribution of electrons provides the average voltage to be zero, however, the average power is not zero in this case.

So, this non zero power is nothing but the noise. And as it is the outcome of thermal action. Hence also known as thermal noise power. Thermal noise is sometimes referred as Johnson noise or white noise.

Shot noise in a communication channel is the result of random variation in the appearance of electrons and holes at the output side of the device. These random movements are the result of discontinuities in the device which is being used by the system.

The shot noise generates sound like several lead shots are striking over a metal plate or tube.

It also occurs in pn junction diodes, as though movement of carriers within the diode is due to the action of an external potential. But, sometimes their random movement generates shot noise.

Thus we can say non-linearity or discontinuity in the system generates shot noise.

Here the name itself is indicating the cause for generation of this type of noise.

As it gets generated when the system is composed of multiple paths, and during the flow, the current gets divided in these paths. These are nothing but the result of random variation in the divisions. Due to this reason some devices offer low partition noise while some offers, high.

It is also known as low-frequency noise and it occurs because of the variation in the carrier density. Due to this variation or fluctuation, the conductivity of the material gets varied.

So, when a direct current is allowed to flow through the conductor then fluctuating voltage drop across in the conductor results in flicker noise voltage.

It is to be noteworthy here that, the mean square of flicker noise voltage is directly proportional to the square of the current flowing through the device.

It is also known as high-frequency noise. It arises when the charge carriers require comparatively more time to travel from one end to another within the conductor. This effect is called transit time effect.

This is all about noise in the communication system and its classification.