Both RTD and Thermistor are used to detect the change in temperature. However, the crucial difference between RTD and Thermistor lies in the material of their construction. RTD is constructed with materials that are pure metals whereas thermistors are fabricated with semiconductor materials of ceramic or polymers.

It is such a device that does not hold the property of producing its own supply. Thus, it needs a voltage source in order to perform the circuit simulation.

Now, the question arises how an RTD is used to determine temperature change?

Suppose some voltage is applied to the sensing element of the RTD. Then, it causes the molecules of the metal to dislodge and collide with each other. With the increase in applied voltage, the probability of collision of molecules somewhat increases. Thus, their movement somewhat disturbs and this causes the resistance of the device to get increased. Thereby, raising the temperature corresponding to RTD.

The materials that are used as resistance elements in RTD must possess a high-temperature coefficient of resistance along with high resistivity and linearity. Also, it must show stability towards electrical characteristics of the metal. Platinum is majorly used in the construction of RTD. However, nickel and copper are also used in its construction.

The thermistor is a device that is composed of the word thermal and resistor, as its resistance changes with the variation in temperature associated with it. These are basically those resistors that show thermally sensitive nature.

These are composed of semiconductor materials or can be manufactured with the combination of oxides of metal like manganese, cobalt, etc. 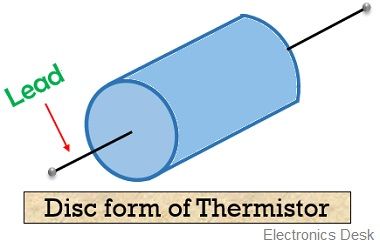 : α and β are the two constants that entirely depends on the material used for construction as well as construction technique involved.

Now, a question strikes our mind that how thermistor possess negative temperature coefficient of resistance?

Key Differences Between RTD and Thermistor