Definition: A signal generator is an equipment that is used to produce signals of varying amplitude and frequency. It is usually a source for generating sinusoidal signals. However, it can also produce a signal in the form of a square wave, triangular wave or sawtooth wave etc.

The adjustable frequency range of the generated signal falls between a few Hz and MHz. While the amplitude can be adjusted from some millivolts to volts.

An oscillator also generates sinusoidal and non-sinusoidal waveforms. But, a signal generator holds the ability to modulate the output signal with another signal.

The major use of the signal generator is to provide proper signals for the purpose of testing, calibrating or troubleshooting of electronic circuits.

Usually, the signal generated can be amplitude or frequency modulated. However, it is not necessary that every time only the modulated signal is produced.

If signal generators produce an unmodulated signal at the output, then these signals are known as continuous height wave signal.

But if it generates a modulated signal at its output then the modulating signal can be either an externally applied wave or internally generated wave.

The figure here shows the block diagram representation of an AM signal generator: 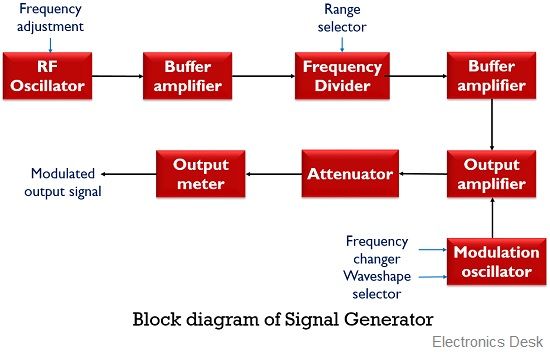 In the above figure, it is clearly seen that an RF oscillator is placed at the beginning of the arrangement. This oscillator generates a carrier signal having a frequency range 100 KHz to 30 MHz. The frequency of this carrier signal can be varied by making use of a selector switch.

This waveform selector is basically used to have sinusoidal or non-sinusoidal waveforms at the output.

So, the generated signal gets amplified in the output amplifier.

Now, a question strikes our mind that what is the need for buffer amplifier?

So basically, the buffer amplifier acts as an isolator in order to provide good isolation between the oscillator and output amplifier. This reduces the effects of distortion in the generated signal.

It is to be noted here that for continuous variation in the output voltage, its input must be variable. A signal generator must exhibit high amplitude stability. As when the radio frequency is varied then the amplitude must not show any significant variation.

A function generator is a device that generates various types of waveforms at its output like a sinusoidal wave, sawtooth wave, a triangular wave, square wave etc. It offers variable frequency in the range of few Hz to several KHz.

The generation of a variety of waveforms proves its versatility as various waveforms are utilized in different applications.

Sometimes different waveforms (generally 2) can also be generated at the same time by a function generator.

It is a type of signal generator that has the ability to generate variable frequency sinusoidal waveform. Basically, in a sweep frequency generator, the output frequency automatically varies between 2 selected values.

But, in this case, the amplitude of the signal is kept constant with the variation on frequency.

Either analog, digital or combination of the two techniques can be utilized by the pulse generator. By varying the width of the pulses various forms of pulsed signals can be achieved.

Requirements of a Signal Generator

So, from the above discussion, we can clearly say that a signal generator is able to produce modulated signals of different waveforms.