The resistivity of magnetoresistor depends on the mobility of electrons. Semiconductor materials like indium antimonide or indium arsenide are used for fabrication of magneto resistors.

Usually, the effect of magnetic field on the resistance of a material depends on the strength as well as the orientation of the magnetic field wrt current.

It is noteworthy here that, the sensitivity of magneto resistors depends on the total applied magnetic field and do not rely on the rate of change of the magnetic field.

The figure below shows the symbolic representation of magnetoresistor:

A magnetoresistor is basically formed by the deposition of a film of indium antimonide or nickel antimonide over a substrate of 0.1 m thickness. The thickness of the depositing film is about 25 µm.

In order to have variation in the resistance of the material in the absence of a magnetic field, the dimensions of the indium film are changed.

A plastic or ceramic material forms the insulation between substrate and indium film. These are basically non-magnetic material which is coated with a magnetic base.

A magnetoresistor operates on the law of electrodynamics. According to this law, in the presence of a magnetic field, Lorentz force is experienced by charge carriers. Hence, the electrons move in a different manner thereby causing the resistivity of increase with a decrease in current.

With the increase in strength of the magnetic field, resistance also increases and vice-versa.

When an external magnetic field is not applied, then the mobile charge carriers present inside the material follows a direct straight path. Due to this, electric current also flows in a straight path thus resistance, in that case, will be low.

As against, when a magnetic field is applied externally, then due to Lorentz force the electrons instead of flowing through direct path now starts following an indirect path. This causes the resistance of the material to increase. 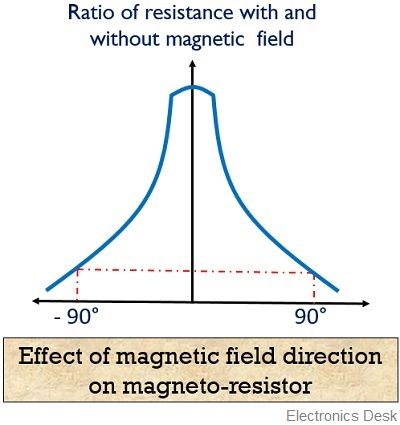 It is to be noted here that when the crystals of indium antimonide are parallelly placed wrt each other. Also, the magnetic and electric field are perpendicular to each other, then maximal resistance change in the material occurs.

In some metals, like bismuth magnetoresistive effect can be seen at room temperature also. However, when the external magnetic field of 1.5 Χ 106 A/m is applied to bismuth, then its resistivity becomes twice of the resistivity in the absence of magnetic field. Hence, it can be used in the measurement of the flux density. 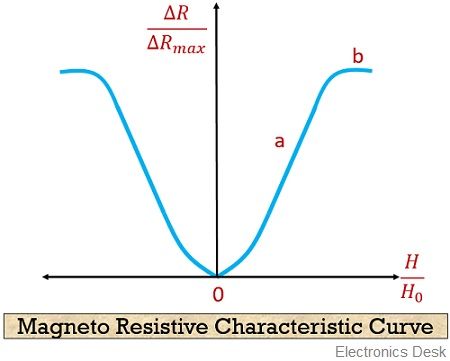 Here, H0 represents the effective anisotropy field in the material. When no external field is applied then the magnetization of the field exists at elemental length 0. But, with the increase in the applied field, the resistance also increases, this is represented by point a, in the above curve.

With further increase in the applied field saturation is reached that is shown by point b.

For all the metals, the change in resistance of the metal is positive wrt applied magnetic field.

Basically, the rotational change in direction of magnetization somewhat distorts electron cloud. This deformation causes variation in the scattering of the conducting electrons.

So, the tunneling current in these devices is high when the two ferromagnetic layers are aligned parallelly with each other as compared to antiparallel orientation.

These are widely used in magnetometers in order to determine the direction and intensity of magnetic field. Also, these are used in position sensors and ferrous metal detection.