Now, the question arises why a computer system understands only binary values?

The answer to the above question is as a computer is an electronic device and all the electrical and electronic devices understand only electrical signals. So, 0 and 1 binary digits simply correspond to the off and on state of the device respectively.

The digits 0 and 1 show the same meaning as in the decimal number system. However, the variation in the position of binary numbers depends on the value being represented.

As with the increase in the position from right to left the weight shows successive increment in the power of 2.

Let us have a look at how we can write a number in binary digit in the power of 2:

The two binary digits 0 and 1 are known as bits. A bit is considered as the primary unit of information. The word BIT is derived from a combination of BInary and digiT. However, a combination of 8 bits gives rise to another unit known as a ‘byte’. Also, when 4 bits are combined then unit ‘nibble’ is formed.

As we know there exist 10 digits in decimal number system i.e., 0 to 9. However, by using the combination of these words on varying their position, multiple quantities can be represented.

Let us first understand how counting is done in binary number system then we will move further to understand its decimal representation.

Here, we have only 2 digits as the counting begins with 0 and ends with 1. However, due to the presence of only 2 digits, in successive counting, digit 1 is shifted towards left and the digit at its right becomes 0 thus providing 10 in binary which is nothing but represents 2 of the decimal number system.

The table given below will provide you with a better idea about the representation of decimal in binary and its counting format: 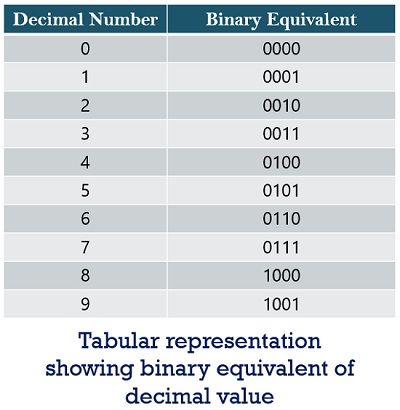 It is clear from the tabular representation shown above that a binary number exceeds in the power of 2 beginning with 0 which we have already discussed earlier.

How to represent decimal numbers in binary format

Let us now move towards mathematical implementation of the above-discussed method:

For example, let the number be 15:

The method is known as double dabble method.

The fractional decimal to binary conversion in the form of mathematical implementation is shown below: 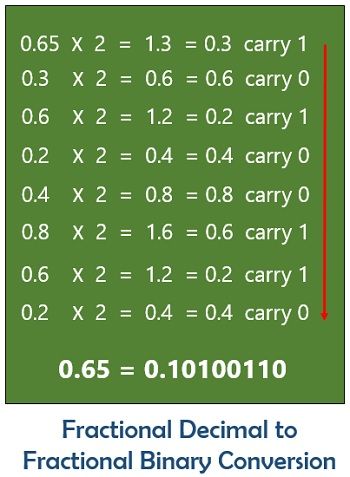 Here, in this case, the carry is noted in the downward direction. It is noteworthy here that the binary multiplication is usually continued up to eight binary digits. Hence, we can say that the result obtained is not exactly equivalent but is considered as approximate value.

With the evolution of the binary number system, the operation of the various task has been simplified. By making use of binary values various logical problems that rely on Boolean algebra can be solved easily.

A binary number system performs various logical operations such as addition, subtraction, multiplication and division. However, among all of them, addition is most important.