Definition: Half adder is a combinational circuit that is used to add two binary numbers of one-bit each. It does not hold the ability to consider the carry-in generated from previous summations. The addend, when added with the augend, provides sum and carry (if present).

Half adders are used in addition of LSB of the numbers only.

In simple words, we can say, that it adds two binary numbers of 1 bit each and generates the output as the sum and carry. It is noteworthy that, not all summations bring a carry with it, however, if it holds a carry then the carry bit is represented as high otherwise low.

When subtraction of two numbers is performed then basically difference and borrow are the terms that are needed to be considered. This we have already discussed in half subtractor.

At the time of addition of two-bits in case, a carry bit is generated then it gets added with the next column bit that is to be considered. This is the way to perform basic addition. 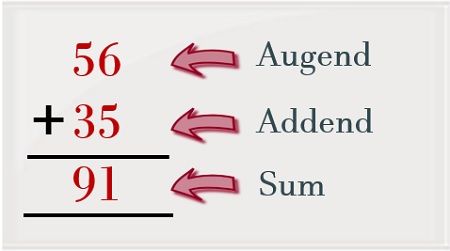 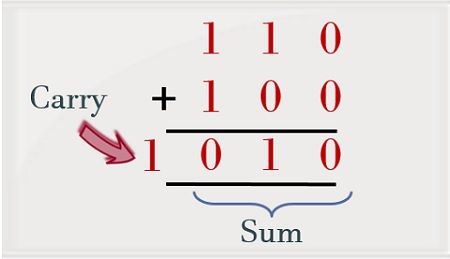 We will discuss later how the addition of 1 and 1, provide 0 as the sum and 1 as the carry.

Truth Table for Half Adder

In the previous section of this article, we have discussed, how the addition of decimal and binary numbers take place. But in decimal as well as binary addition we have considered more than 1-bit number. However, the half adder operates on only a single bit.

So, let us now consider the truth table for half adder showing binary addition of 1-bit numbers: 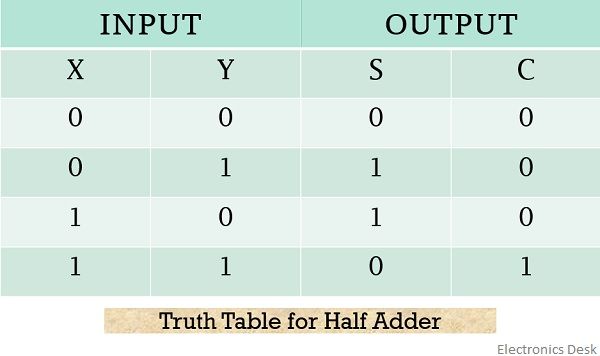 Here, X and Y are the two, 1-bit binary numbers applied at the input of the half adder while S and C denote the sum and carry bits respectively.

On considering the above table,

Now, by considering the truth table for half adder one can have the desired K-map for both sum and carry bit.

The figure below represents the K map for sum bit i.e., S 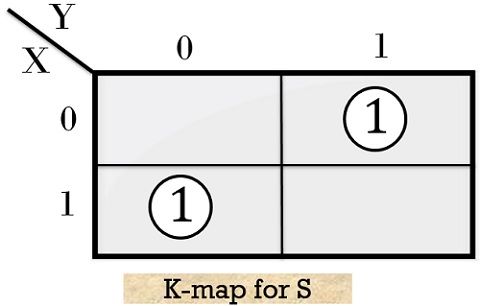 So, the desired implicants for the above given K-map will be

Therefore, the realized Boolean expression will be

From the above expression, we can say that the summation performed by half adder is nothing but the X-OR operation of the two inputs. 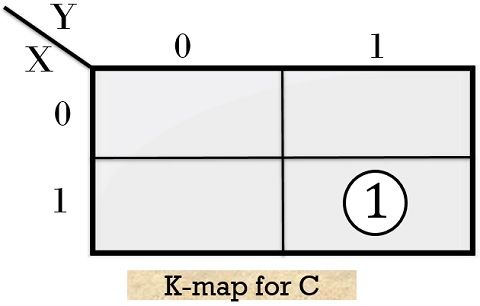 Hence for this particular case, the realized Boolean expression will be

These are the Boolean expressions for sum and carry bit generated by the half adder.

Logic circuit for Half Adder

The figure below represents the circuit representation of half adder by making use of X-OR & AND gate: 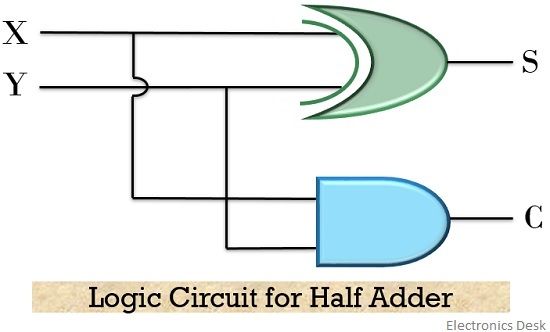 The above-discussed logic of half adder can also be realized by the help of either NOR or NAND gate only. 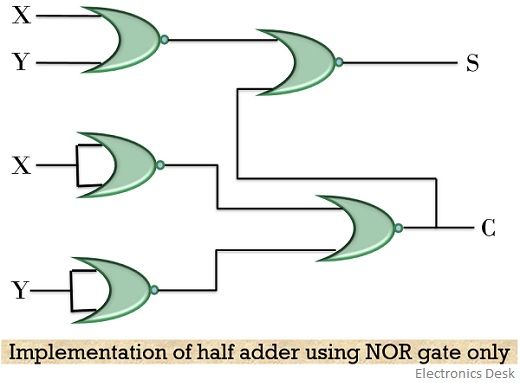 Also, the figure below represents the circuit of half adder using NAND gate only 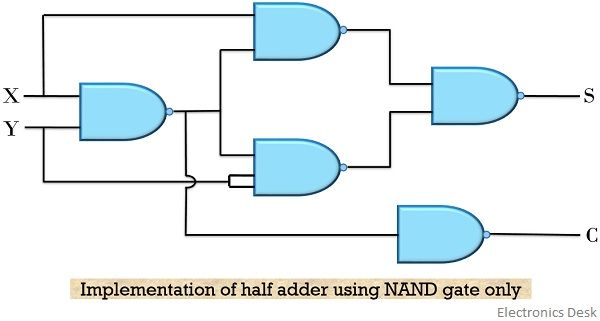 So, from the above discussion, it is clear that adders perform the addition of bits but half adder can only add single bit numbers. Therefore, for the addition of more than single-bit numbers, full adders are used.

1 thought on “Half Adder”