Definition: Gray Code is the minimum-change code category of coding in which, the two consecutive values changes by only a single bit. More specifically we can say, it is a binary number system where while moving from one step to the next, only a single bit shows variation.

This coding technique was invented by Frank Gray, thus it is named so.

It is also termed as reflected binary code or cyclic code. It is an unweighted code, as here like other number systems, no particular weight is provided to various bit positions.

Basically, binary code is changed to gray equivalent in order to lessen the switching operations. As only a single bit is changed at a particular time duration this leads to a reduction in switching from one bit to another.

Let us have a look at the tabular representation, showing gray value for different binary values:

Consider decimal value 7 and 8, to understand the switching of bits.

Thus we can conclude that in a binary system, all 4 bits are getting changed simultaneously. Hence we can say multiple bits are changing at the same time.

So, here we can see that only a single bit i.e., MSB is changing from 0 to 1 rest other bits are the same.

This shows that in binary coding, multiple bits are changing simultaneously, while in gray coding only a single bit is getting change at a time to move from one value to another.

Therefore, we can say switching is easy in gray code than in binary code.

Now, the question arises, how can we achieve, a gray equivalent from a binary code or vice versa. For this, we will separately discuss the conversion process using examples.

The conversion process from binary code to a gray involves the following steps:

This is how the binary code is converted into gray equivalent.

Suppose this is the binary value which is to be converted into equivalent gray value.

As we have discussed while mentioning the steps, that the first bit or MSB of the gray equivalent will be the same as the MSB of the binary value.

Now add the two adjacent bits starting from MSB to LSB and writing the result obtained as the next bit.

We know the addition of binary 1 and 1 will give 0 as the sum and 1 as the carry. And we have already discussed that the carry bit must be ignored, while the sum bit achieved will be put as the next bit in the gray value. 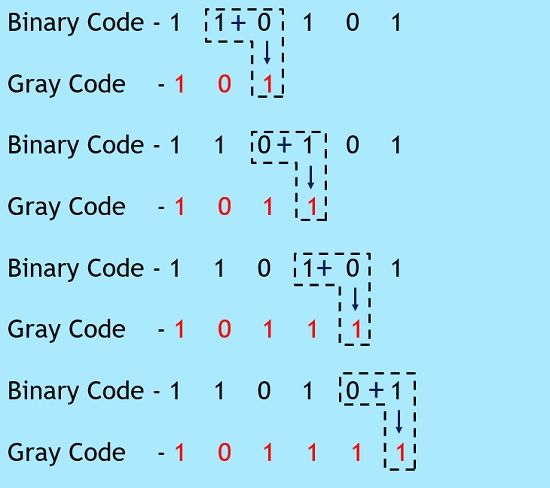 So, the equivalent gray value for the given binary code is given as

Consider the above given binary value which is to be converted into gray equivalent.

So, first, we will write the MSB of the binary digit as the MSB for the gray equivalent. 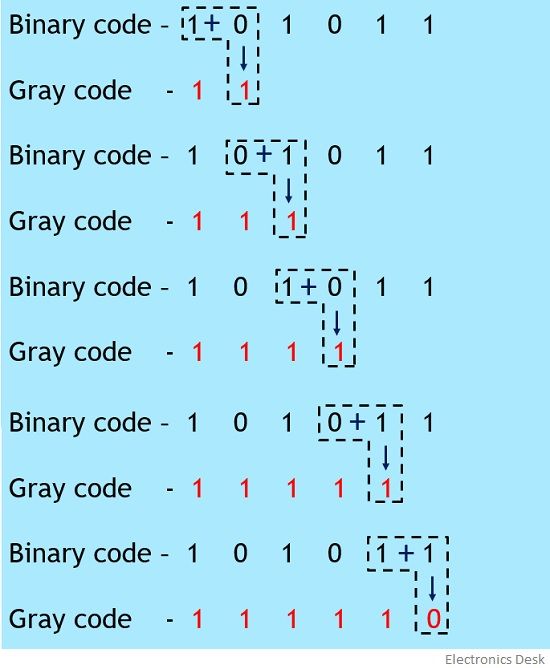 So, in this way a binary code is converted into gray equivalent.

Let us now understand how gray code is converted into binary code.

The steps given below are required to be followed in order to convert a given gray value into its binary equivalent:

In this way, a gray code is converted into the binary equivalent.

So, in the first step, writing the MSB of gray value as the MSB of binary equivalent.

Now on adding the achieved binary bit and the next adjacent gray bit till the LSB of the sequence, 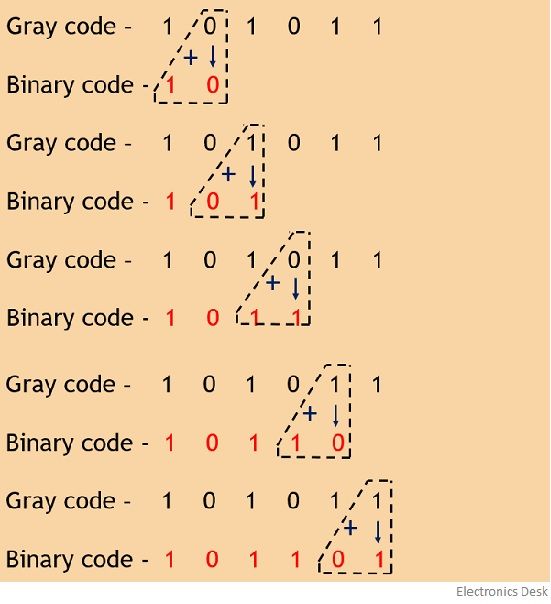 Now on adding the binary code with the gray value, we will get,

Thus the equivalent binary code will be

In this way binary to gray code and gray to binary code conversion is performed.