Satellite Networks are defined as the orientation of various elements that establish communication through various nodes from one point of the earth to another point. Any satellite network can provide both types of transmission technologies i.e., point to point as well as broadcasting connections.

When we talk about a network through which data is transmitted or received then it is known to us that the whole network operation is divided into layers and each layer operates independently from other layers. This is so because the network operations get simplified through a layered approach but sometimes this degrades the overall performance.
Like in a network, the physical layer performs transmission of data bits over the channel while the link layer is responsible for packet transmission over a link. However, network and other higher layers help to perform end-to-end delivery.

What is Satellite Communication?

In our previous content, we have already discussed that we need satellite communication because ground wave and sky wave propagation fail under certain circumstances as they do not support very long-distance signal transmission (generally supports up to 1500 km). And the reason for this is the curvature of the earth as it acts as an obstruction in signal transmission between two end terminals. Also, the signal attenuates when transmission distance increases. Hence one should make use of repeaters that can provide necessary amplification to the transmitted signal.

Thus, to deal with this, the satellites in space act as repeaters to help transfer signals from one end to another.

A satellite network plays a crucial role in sending the data from one location to another by using an artificial satellite. It is quite an effective method through which data is broadcasted over a large geographical location. Thus, through satellite communication data can reach remote locations.

Satellites are basically, artificial stars in the sky but are very much technologically advanced as through this one can find a way around the world, like carrying telephone calls, emails, webpages, TV programs across the sky. Sometimes these are regarded as artificial birds that are present at such high altitudes that they are far beyond the reach of any real bird and such a high altitude facilitates global network infrastructure.

Telephone and TV broadcast terrestrial networks are known to be the origins of the satellite network. However, with technological advancements, the capacity of the whole network has shown a considerable increase by extending the coverage regions up to oceans for mobile applications in the case of data and multimedia services.

When we talk about a basic satellite unit then it is simply a repeater that helps in relaying signals from one point to another. These satellites are referred to as transparent satellites or bent pipe satellites as these hardly perform any processing and simply act as a link between terminals.
However, some satellites offer onboard processing within the communication subsystem so that errors can be detected and corrected and this enhances the quality of communication links. Apart from this, we can have onboard switching through which network in the space is formed that efficiently uses the radio resources and this has supported the excellent development of the internet.

What is Satellite Network?

A satellite network consists of various satellites that form interconnections between various earth stations and individual user terminals. The figure shown below clearly represents the same. 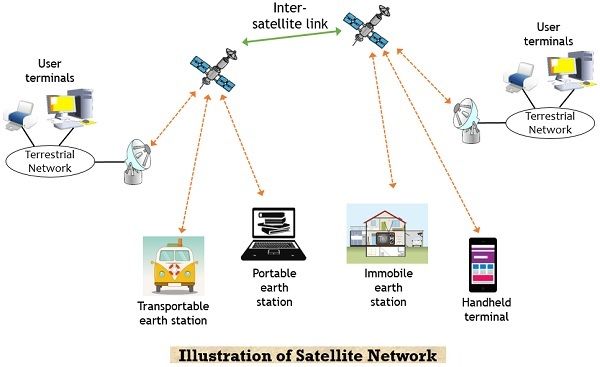 The three major roles that a satellite in space exhibits are as follows:

Satellite networks make use of hardware as well as software that provide functions and mechanisms so that information can get transmitted and received in the correct format with the usage of the correct protocol. By incorporating radio links one can ease the mobility of the user terminals by utilizing high capacity optical fiber as the backbone for the overall connection.

When digital signal processing came into existence, the hardware implementation was replaced by software. By this, the flexibility of the overall network has significantly improved and this has reconfigured the whole network thereby reducing the overall cost as well. Due to this reason, the software approach is more preferable in comparison to hardware. Though it is to be kept in mind that hardware acts as the foundation of any system thus is considered to be the building block of the whole system.

Satellite Networks are quite useful in various military and civilian applications. In civilian regions, various rural areas where fiber-based networks cannot be properly maintained, satellite networks are used. While for military-related purposes, it is used in communicating in hostile environments. Like we have mentioned that various applications include telephony, broadcast and broadband services, internet and video services, etc.

One of the questions arises in our mind that – both TV signal reception and internet services make use of satellite networks, then why there is no buffering issue noticed in television videos but the same happens in the case of YouTube videos?

A satellite TV user chooses a channel from simply a collection of 300 to 400 channels. However, the internet offers a choice from millions of videos. Thus, internet providers handle more volume of traffic than TV broadcasters. Due to this reason, high traffic may sometimes lead to traffic congestion and buffering.