80286 Microprocessor is a 16-bit microprocessor that has the ability to execute 16-bit instruction at a time. It has non-multiplexed data and address bus. The size of data bus is 16-bit whereas the size of address bus is 24-bit.

Now the question arises what are the factors that make 80286 more advantageous than 8086 microprocessor? 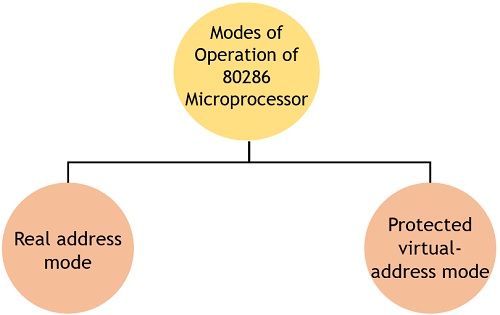 In real address mode, this microprocessor acts as a version of 8086 which is quite faster. Also without any special modification, the instruction programmed for 8086 can be executed in 80286. It offers memory addressability of 1 MB of physical memory.

As using virtual memory, space for other programs can be saved. Sometimes bulky programs also do exist that cannot be stored in physical memory, so virtual memory is utilized in order to execute large programs.

This mode is used in 80286, so that in case of memory failure in real address mode, it can stay in protected manner.

What is virtual memory?

Virtual memory is that part of hard disk which can be utilized for storing large instructions inside the system. This extra memory can be addressed by the computer other than the physical memory.

When there exists an instruction that is to be loaded in the memory but whose size is greater than the provided physical memory. Then some part of hard disk is used in order to store that instruction, which is known as virtual memory.

The figure below shows the architectural representation of 80286 microprocessor: 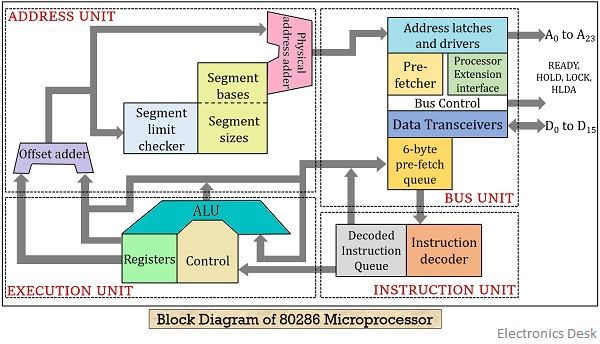 As we have already mentioned earlier that it is a 16-bit microprocessor thus holds a 16-bit data bus and 24-bit address bus. Also, unlike the 8086 microprocessor, it offers non-multiplexed address and data bus, which increases the operating speed of the system.

80286 is composed of nearly around 125K transistors and the pin configuration has a total of 68 pins.

This address specifies the memory location from where the data or instruction is to be fetched. The fetching of data through the memory is done through the data bus. For faster execution of instruction, the BU fetches the instructions in advanced from the memory and stores them in the queue.

Once the execution of the instruction is performed then the result of the operation i.e., the desired data is send to the register bank through the data bus.

We know that whenever an interrupt gets generated in a system, then the execution of the current program is stopped and the execution gets transferred to the new program location where the interrupt is generated.

But once the interrupt gets executed then then in order to get back to the original program, its address as well as machine state must be stored in the stack. Basically there exist 3 categories of interrupt in 80286 microprocessor:

External or hardware initiate interrupt are those interrupts that gets generated due to an external input. And are basically of two types:

Sometimes when multiple programs are allowed to be executed in a system, then this leads to generation of INT instruction, and such an interrupt is known as software interrupt.

Another interrupt in 80286 exist due to some unusual conditions or situations generated in the system that leads to prevention of further execution of the current instruction.

So, this is all about the modes of operation, architecture and interrupts of 80286 microprocessor.