80386 Microprocessor is a 32-bit processor that holds the ability to carry out 32-bit operations in one cycle. It has a data and address bus of 32-bit each. Thus has the ability to address 4 GB (or 232) of physical memory.

Multitasking and protection capability are the two key characteristics of the 80386 microprocessor. 80386 has internal dedicated hardware that permits multitasking.

Of the two modes of 80286 microprocessor, initially, the 80286 was booted in real mode. However, to have better operating performance, separate software command is used to switch from the real mode to the protected mode. But it requires the resetting of the microprocessor in order to switch to real mode from protected mode. This drawback was eliminated in 80386 that allows the switching between the modes using software commands.

In the protected mode, 80386 microprocessor operates in a similar way like 80286 but offers higher memory addressing ability.

In virtual mode, the overall memory of 80386 can be divided into various virtual machines. And all of them acts as a separate computer with 8086 microprocessor. This mode is also called virtual 8086 mode or V86 mode.

The other one is the virtual real mode, this mode allows the system to execute multiple programs in the protected memory. And in case a program at a particular memory gets crashed then it will not cause any adverse effect on the other part of the memory.

The figure below shows the architectural representation of 80386 microprocessor: 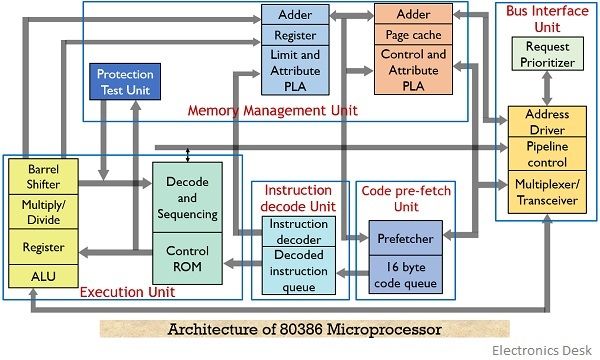 Basically, it has 6 functional units which are as follows:

As we have already discussed that the 80386 possesses the ability of 3 stages pipelining thus performs fetching, decoding, and execution simultaneously along with memory management and bus accessing. Thus all these units operate parallelly. This pipelining technique leads to a reduction in overall processing time thereby increasing the performance of the overall system.

Let us now move further and understand the operation of each unit in detail.

The bus interface unit or BIU holds a 32-bit bidirectional data bus as well as a 32-bit address bus. Whenever a need for instruction or a data fetch is generated by the system then the BIU generates signals (according to the priority) for activating the data and address bus in order to fetch the data from the desired address.

The BIU connects the peripheral devices through the memory unit and also controls the interfacing of external buses with the coprocessors.

It is to be noted here that, code prefetching holds lower priority than data transferring. As whenever a need for data transfer is generated by the system then immediately the code prefetcher leaves control over the buses. So that the BIU can transfer the required data. But prefetching of instruction and storing it in the queue reduces the wait for the upcoming instruction to almost zero.

We know that instructions in the memory are stored in the form of bits. So, this unit decodes the instructions stored in the prefetch queue. Basically the decoder changes the machine language code into assembly language and transfers it to the processor for further execution.

This unit has two separate units within it. These are

Suppose a file (either data or code) is needed to be accessed is stored in the memory at PL0. Then only those programs which are working at PL0 would be able to access that file. While other programs will not be able to access the same. Also, if a file is present at PL1, then programs of PL0 and PL1 both can access it. As PL0 has a higher priority than PL1. So, for protection purposes, the main part of the OS is stored in PL0 while PL3 holds the user programs. Providing protection to the data or code inside the system is the most advantageous factor that was first given by the 80386 microprocessor.

Paging Unit: The paging unit operates only in protected mode and it changes the linear address into a physical address. As the programmer only provides the virtual address and not the physical address. The segmentation unit controls the action of the paging unit, as the segmentation unit has the ability to convert the logical address into the linear address at the time of executing an instruction. Basically, it changes the overall task map into pages and each page has a size of 4K. This allows the handling of tasks in the form of pages rather than segments.

The paging unit supports multitasking. This is so because the physical memory is not required to hold the whole segment of any task. Despite this, only that part of the segment which is needed to be currently executed must be stored in that memory whose physical address is calculated by the paging unit. This resultantly reduces the memory requirement and hence this frees the memory for other tasks. Thus by this we get an effective way for managing the memory to support multitasking.

A noteworthy point over here is that 80386 has 2 different versions. These are 80386SX and 80386DX. The SX stands for single execution while the DX stands for double execution.

However, 80386 in general has a 32-bit data bus that needs 4 banks. So, to access some of the features of 80386 in a system having 8086 processor, we use 80386SX as a processor having a data bus of 16-bit. Thus, in this case, a system can be upgraded to facilities of 80386 by simply changing the processor despite changing the overall system. This is the reason why we have 80386SX version of the 80386 microprocessor.