This phenomenon was defined in 1842 by an Austrian physicist Christian Doppler.

We have already discussed in our previous article of the radar system, that radar is used to determine the position of an object in space by transmitting electromagnetic signal. When the signal gets interacted with the object then an echo is produced which is received by the receiving antenna of the radar system.

And in case of moving object, the frequency of the signal received is different from the one that is actually transmitted. And this frequency shift is an outcome of the movement of the target.

Here in this article, we will discuss the variation in the frequency with respect to the movement of the target.

So, the basic point that is needed to figure out here is how the variation in frequency is interpreted in case of an object in motion?

Basically, there exist two cases that show the change in frequency according to the Doppler effect.

Basically, for a moving target, the speed of movement is also needed to be determined by the radar system. So, the Doppler frequency shift i.e., the difference of originally transmitted frequency to the received frequency shows the speed of the object.

It is to be noteworthy that here we are discussing the Doppler effect of radar system but it is applicable for all wave motion.

Let us first understand in detail about the variation in the frequency with respect to the movement of the target.

The reason behind this is that due to a stationary position, the waves transmitted every second by the radar will be equivalent to the number of waves received.

But if the target is non-stationary and is moving towards the radar then, in this case, a large number of sound waves will be received by the radar per second after being interacted by the target. And so greater number of waves indicates the increase in frequency.

Thus doppler shift will be high in this case.

As against when the target is moving away from the transmitter then the number of waves received per second gets reduced. Thereby indicating a reduction in frequency. 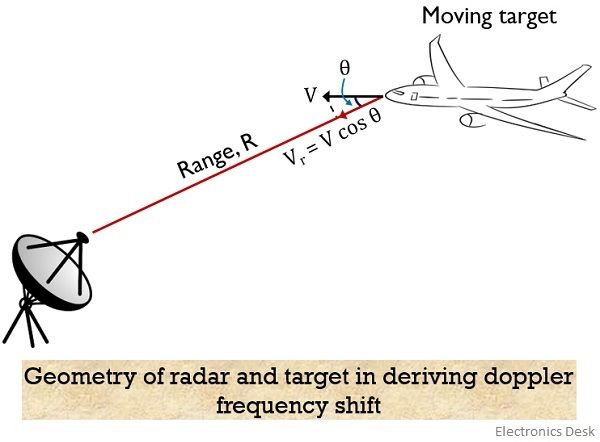 Let n be the total number of wavelengths in the path between radar and target in both the direction and it is given by:

It is to be noted that an angular excursion of 2π is corresponding to a single wavelength.

Therefore, the total angular excursion is given by:

With the movement of the target, R and φ both show variation.

And is given by 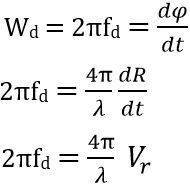 So, further on simplifying we get,

This is the equation for the doppler frequency.

The relative velocity in case of moving target is given as:

: V is the velocity of the target and

It is to be noted here that the shift in frequency is positive for a target moving towards the radar. Whereas negative for the movement of the target away from the radar.