We know that a picture is usually composed of very small elementary regions of light and these regions are known as picture elements. And combinely these picture elements comprise a visual image.

A TV camera tube or pick-up tube functions in a way that it detects every light element separately so as to provide an electrical signal proportional to the intensity (brightness) of the elements present.

As we have already discussed that the smallest elementary areas of light are known as picture elements. Thus, combinely these picture elements form a visual image. The main aim of a camera tube is to detect each element independently and produce an electrical signal according to the brightness of each element.

So for this light from a scene is first provided to an image plate, which is a photosensitive surface. And thus the light of different intensities on the surface of the image plate is changed into equivalent electrical variations.

Thus basically a photoelectric conversion is happening where optical information is changed into electric form.

However, an important point to be considered here is that picking-up of optical information must be quite fast. But simultaneous pick-up is almost an impossible task.

Thus electron beam is used for scanning of the signal. The beam performs successive movement line-by-line across the image plate, so as to provide successive signal variation.

Thus at the time of scanning the complete image is divided and the image plate produces the electrical equivalent of each discrete small light region. 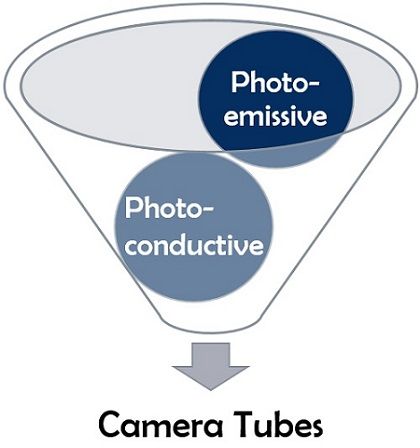 Photoemissive Camera Tubes: These tubes operate on the principle of photoemission. Image orthicon is the photoemissive type of camera tube.

We all know that there exist some metals that release electrons when light energy falls on their surface. These metals are known as a photocathode and the emitted electrons are known as photoelectrons.

By gaining the energy from photons the electrons overcome the potential barrier and get emitted from the surface of the metal. The number of emitted electrons depends on the intensity of incident light. And in this way, light energy is changed to electrical energy.

Usually, alkali metals are used as the target plate of photoemissive camera tubes as they possess low work-function.

Photoconductive Camera Tubes: These tubes operate on the principle of photoconduction. In the case of these materials, the conductivity or resistivity of the material depends on the light intensity falling on the surface. Vidicon and Plumbicon are the two major types of photoconductive camera tubes.

Basically, in the photoconductive type of target plate, the image that falls on its surface is changed into a charge distribution. Further, an electron beam scans it and changes it into an electrical signal.

The photosensitive picture elements used in the camera tubes should be such that it can absorb the photon light, produce the integrated charge image and store it until the pattern gets fully scanned.

The electron beam used for scanning purpose is utilized to detect how much charge is being stored at each pixel, in order to generate a complete time-domain signal. The waveform of the signal shows the brightness at each successive point during scanning.

In storage type of camera tubes, the device stores the charge generated on each pixel that eliminates the chances of loss of information, at successive scanning.

There exists always a need for highly sensitive camera tubes so that scenes of even low light levels can be easily captured and televised. Therefore, storage type tubes must be taken into consideration while designing.

The scanning beam is used to determine the charge produced by the incident light. Basically the electrons from the beam get accumulated on the positively charged pixels according to the variation in the light intensity in photoemissive target plates.

Usually, magnetic focusing is employed in camera tubes, in order to have a highly focussed electron beam.

The beam when approaches target plate gets deflected by the magnetic field generated by the horizontal and vertical deflecting plates. This plate controls the motion of beam so that the electrons land on the target pixel with approximately zero velocity thereby preventing secondary emission.

Those electrons that are not utilized for recharging of the pixel gets returned towards the gun, usually known as return beam. During the backward journey, these electrons strike an electrode present near the cathode of the gun.

The number of returning electrons varies with the deposited charge. Thus the return beam generally holds the information of each pixel in inverted form.

We know that the movement of charge carriers generate current. Therefore, the current at the collecting electrode shows amplitude variation thereby representing brightness variation. This generated current is allowed to flow through a resistor, and the drop across it generates the video signal.

The beam holds the ability to scan 312.5 lines/field. And in one second 50 such fields are scanned.

Thus the magnitude of current indicates the brightness variation of the image.

When the electron beam reaches the metal plate with high velocity, then secondary emission of electrons takes place.

Thus camera tubes are incorporated with electron multiplier structure, that utilizes these secondary electrons to boost the level of low photoelectric current.