A picture tube basically acts as a transducer that changes electrical video signals into corresponding light variations to generate an actual image on the screen.

Also, sufficient deflection is provided to the moving electron beam so that it can completely scan the screen horizontally as well as vertically in order to give rise to a black and white image.

The figure below represents the basic structure of a monochrome picture tube comprising necessary elements: 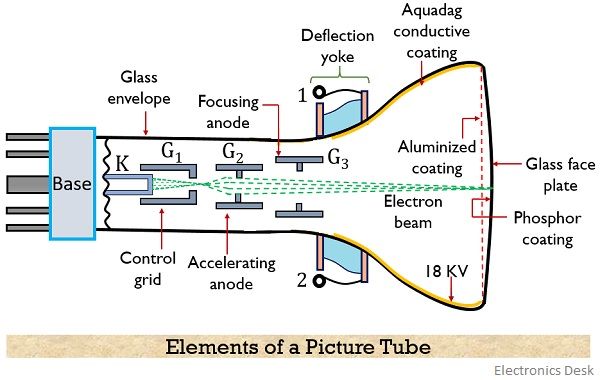 There are two major elements of a monochrome picture tube that are electron gun and a fluorescent screen.

This section is composed of a cathode and some grids.

The screen where the electron beam is allowed to incident is basically a high-quality glass faceplate. The thickness of the glass sheet is 1.5 cm.

Phosphor is coated in the inner region of the material. The electron beam when strikes the phosphor coating then the phosphor particles glow thereby giving rise to the image on the screen. Also to prevent losses, a thin coating of aluminium is present towards the gun side of the phosphor screen.

In order to understand the working firstly, we have to consider the structure of the monochrome picture tube shown above.

Due to indirect heating of the cathode, an electron beam is emitted from the surface of the cathode. As we have already discussed that G1 is at lower potential wrt cathode. Thus electrons propagate towards the control grid.

Further, the beam from a small aperture of the control grid is made to travel inside the tube.

It is to be noted here that for the production of an image on the screen, the electron beam must strike the phosphor surface with sufficient velocity.

Therefore, the aquadag layer is coated on the inner region of the tube, that acts as the second anode for the tube and it provides sufficient velocity to the moving electrons.

This energy is gained by the electrons in the valence shell of the atom in order to reach the conduction band. On returning back to the lower energy state, the electrons emit the gained energy in the form of electromagnetic radiation.

And as its frequency range lies in the spectral region thus is seen by the eyes of the viewer. However, the intensity of the light produced on the screen will depend on the strength of the electron beam striking the surface.

As we know that that a high-velocity beam when strikes the fluorescent surface then along with producing light energy, secondary emission of electrons will also take place.

Therefore, to avoid this the secondary emitted electrons are made to be collected at the conductive coating having very high positive potential. So, this conductive (aquadag) coating along with increasing the velocity of moving electrons also eliminates unnecessary secondary electrons from the tube.