Pentium Microprocessor is one of the powerful family members of Intel’s Χ86 microprocessor. It is an advanced superscalar 32-bit microprocessor, introduced in the year 1993 that contains around 3.1 million transistors.

It has a 64-bit data bus and a 32-bit address bus that offers 4 Gb of physical memory space. While the maximum clock rating offered is around 60 to 233 MHz.

The architectural representation of the Pentium processor is considered to be an advancement of 80386 and 80486 microprocessors. Basically, Pentium has included modifications related to cache structure, the width of the data bus, numeric coprocessor with faster speed along with providing dual integer processor.

In the case of a Pentium processor, there are two caches, one for caching data while another for caching information and each one is of 8K size. By using a dual integer processor, two instructions can be executed in each clock cycle. The data bus width in Pentium is 64-bit which was 32-bit in 80386 and the numeric coprocessor exhibits quite a faster speed than that of 80486.

However, an advancement to Pentium was Pentium pro that is comparatively faster than the former. The reason behind this is that its architecture allows scheduling 5 simultaneous instructions in order to get executed. Along with level-1 cache i.e., 16K-byte like Pentium, it has a level-2 cache that offers 256K-byte size. Not only this, Pentium pro has an error correction unit that offers correction of single-bit error and detection of two-bit error. With the use of additional four address lines, the Pentium pro offers 64 Gb of accessible physical memory.

Following are the features that Pentium processor offers:

We have already mentioned in the beginning that Pentium is a superscalar processor. So, let us first understand

What are Superscalar Processors?

A special category of microprocessors that involves a parallel approach for instruction execution called instruction-level parallelism through which more than one instruction gets executed in one clock cycle is called superscalar processors. It is famous as a second-generation RISC processor because RISC is the ones that operate in a faster manner with reduced instruction sets.

The figure given here is the architectural representation of Pentium Processor: 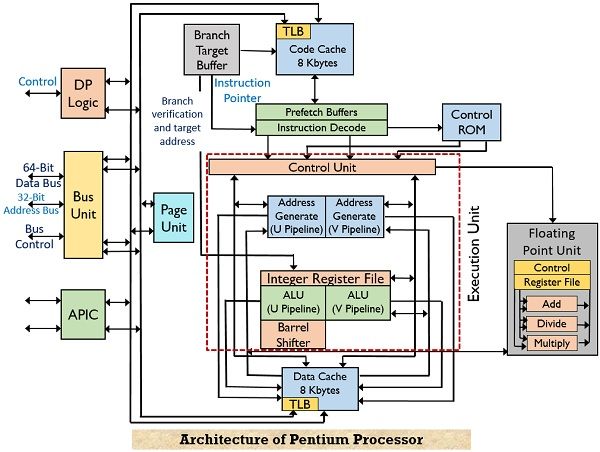 The various functional units are as follows:

Let us now understand, how the architectural operation takes place.

The bus unit of the architecture sends the control signal and fetches cade and data from external memory and IO devices. The size of the external data bus is 64-bit through which burst read and burst write-back cycles can be achieved. The paging unit in the architecture provides optional extensions of around 2 to 4 Mb page sizes.

On the contrary, while checking if BTB gets to know about the occurrence of the branch then the other prefetch buffer in pair gets enabled and starts fetching the instructions from the branch target address. By doing so, the branching instructions get simultaneously fetched and are ready for decoding and execution.

The execution unit within the Pentium microprocessor contains two integer pipelines namely U-pipe and V-pipe and each one has its separate ALU. There are five stages in which these pipelines operate, namely, prefetch, decode-1, decode-2, execute, writeback. The U-pipe is responsible for executing all integer as well as floating-point instructions while V-pipe executes simple integer and some floating-point instructions.

The controlling of the operations of the Pentium processor is provided by the control ROM that has a microcode within it. The control ROM directly controls U-pipe and V-pipe.

Both data and code cache within the processor is organized in the 2-way associated set cache. Each cache has 128 sets and each set has 2 lines which are 32 bytes wide. The LRU (Least Recently Used) mechanism handles the cache replacement.

As we can see clearly in the above figure that the code cache forms a connection with the prefetch buffer by a bus of size 256 bit, thus 256/8 i.e., 32 bytes of opcode can be buffered in one clock cycle. The data cache has two ports that are used to simultaneously deal with two data references.

There is an on-chip Advanced Programmable Interrupt Controller that manages interrupt and offers 8259A compatibility.