Definition: Radar Clutter is defined as the unwanted back-scattered signals or echoes generated from physical objects in the natural environment like ground, sea, birds, etc. Due to the presence of clutter the detection of target by the radar system in the environment becomes difficult.

Sometimes there exist multiple scatterers in the environment that produces unwanted echoes and so the vector sum of these echo signals at the antenna is called radar clutter.

Basically, the echo received by radar can be due to any of the reasons given below:

Whenever a radar system transmits a signal for the detection of a target in the environment then the signal may experience reflection from the objects in the path. These objects can be any building, tower, hills, ground, sea, etc.

So, the existence of these objects in the signal path creates unwanted echoes which are known as clutter.

For a moving target, tracing of echoes is a quite difficult task. This is so because in case of moving target:

It is to be noted here that the echoes generated from the environment are not always unwanted.

Suppose a radar system wants to detect the presence of an aircraft, so for it, the storm clouds in the environment will act as undesired element in the detection of the target. But for the radar meteorologists, the storm clouds containing rain act as the target for determining the rainfall rate.

In a similar way, the objects in the ground could be the targets for ground-mapping radar system but will be the unwanted objects causing clutters for weather radars.

So, this implies that an environmental echo that is the desired signal in one case is simply, a clutter in another case. 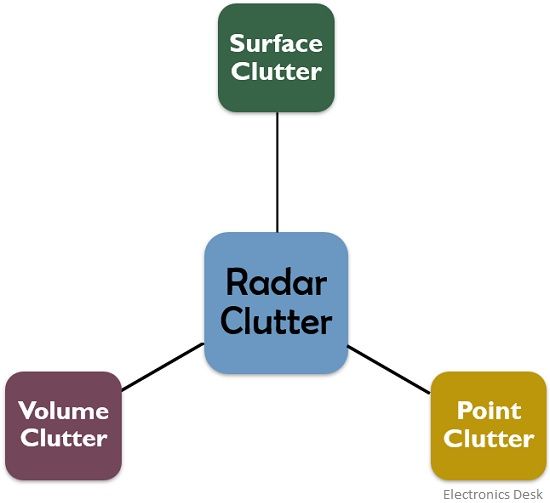 Let us proceed to understand how the clutters are basically classified.

Surface clutters are the echoes generated from ground/land or sea. Generally, the echoes from the objects on the land are stationary. But sometimes the moving objects on the ground leads to the generation of non-stationary echoes.

Also, the clutter generated from the sea is non-stationary in nature due to the movement of waves in the sea.

There exist various factors over which surface clutter depends like the nature of the surface including dimension, roughness, grazing angle, etc.

Basically, the clutter at the radar is considered to be the vector sum of various individual echoes from different objects in which some are stationary like building, tower, etc. While some are non-stationary like leaves, rain droplets, etc.

The echoes due to weather conditions (like rain, snow) and chaff comes under volume clutter.

When we consider any target in the atmosphere then weather clutter acts as the major issue while detecting the target. It can be the outcome of raindrops or snow present in the path of the target. These different components of volume clutter introduce doppler shift during the target detection.

The echoes received by the radar due to the presence of birds or insects in the environment is known as point clutter. The stationary point clutter is also regarded as ‘angels’.

Due to the small dimension, the clutter produced by a single bird or an insect is very small, but radar can detect it if the range is short.

Angel echoes generally are the result of migration of large flocks of birds or various insects.

Detection of Targets in Clutter

Now the question arises how can we detect the presence of desired targets under the existence of undesired clutters?

So in this way, we can say that radar detects the clutter during the detection of a target in the environment.