Satellite Internet is regarded as a network of networks that uses satellites to interconnect the various segments of the network so as to enable communication between devices present at distant locations. Through satellite internet nationwide coverage can be obtained.

Basically, there is no physical structure of the internet on its own rather, it uses satellite links, existing physical plants, optical fibers, etc. which various companies own in order to provide internet facilities. The satellites orbiting in LEO provides fast as well as comprehensive access to the internet to the users.

Satellites serve as an important element to connect the world through the internet. But do you know, that for satellite internet, the low earth orbit is specifically used? Now, one of the questions arises-

Why specifically LEO satellites are used for satellite internet and satellites in GEO or MEO are not used for the same?

LEO satellites are present at 500 to 2000 km away from the earth’s surface thus the transmitted signal from the earth station travels a lesser distance than the LEO or GEO satellites, similar to the case with signals received by the satellites. This leads to provide stronger signals with faster speeds. Another perk of using the LEO satellite is that it travels at a speed of 2700 km/h and revolves around complete earth in around 90 to 120 minutes.

Thus not a single satellite but a collection of various satellites helps in covering the entire surface of the earth which makes the overall system quite expensive.

Fiber optic cables are quite an important element that helps in providing internet to various locations on the earth. More simply, fiber optic cable acts as the backbone of the internet. But is it practically possible to connect the whole world with fiber optic cable?

The answer is no because various limitations are associated with large geographical regions thus on a practical basis it is not achievable to form a fiber optic cable-based internet connection. Thus, to deal with this, with advancement in technology, satellites are placed in space that orbits the earth and helps in the transmission and reception of signals. For this, broadband satellites that can offer internet services without much difficulty are to be used.

Hence, various companies are setting up plans in order to provide fast and comprehensive access to the internet using satellites in low earth orbit. So, if the dense network of broadband satellites is formed then this will lead to provide coverage for the entire earth’s surface. Hence, if with proper implementation, a huge satellite constellation is formed then the world can have an advanced global internet infrastructure.

We have already discussed under satellite network that, the Soviet Union in the year 1957 launched the very first satellite in space which was named Sputnik and after that, a commendable growth in the field of satellite communication has been made. Recently we have discussed that to get internet by satellite, one has to keep the latency shorter as much as possible and small delay in data transfer offered by LEO satellites.
But one of the disadvantages of it is they exhibit accessibility for a short period of time only and so to have lasting and reliable internet connections the overall planning must be such that we must form a comprehensive network of LEO satellites in space. So, in this case, out of the overall continuously moving satellites in space, connection with at least one satellite must be necessary.

Companies like SpaceX, Amazon, and various Chinese firms have proposed that they will offer a direct connection between users and satellites. At the user’s end, phased array antennas are used that helps in linking the users with the satellites in space. However, some other companies like AST & Science are working with the proposal through which one can get straight away satellite access using standard mobile phone technology.

While a company like Telesat uses a different approach for the same where small constellations are made that fundamentally acts as the backbone for local internet service providers (ISPs). In this, simple equipment helps up in linking up with the global internet-using satellite.

It is to be noted here that whatever, the technology is used for the formation of connection, one mandatory thing is that it has to serve a great number of users. Also, it must provide a fast and reliable internet connection, for which, a large number of satellites is also necessary. 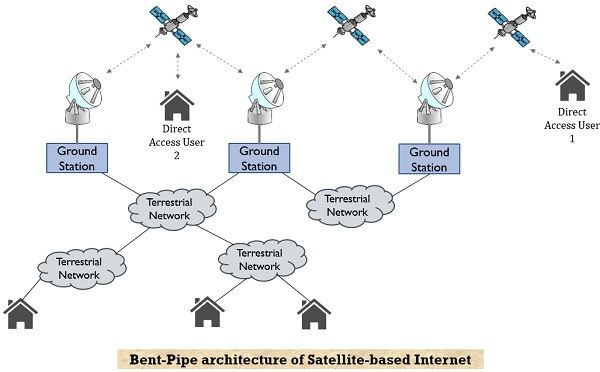 The above-represented scenario helps in providing internet access along with data trunking service. Here the ground stations on the earth, interface the whole satellite network with ground internet infrastructure.

In the bent pipe architecture, the direct communication path between two users is not always maintained in space due to long latency and low efficiency. Thus, the satellite-based internet is reconstructed through OBP and ISL. 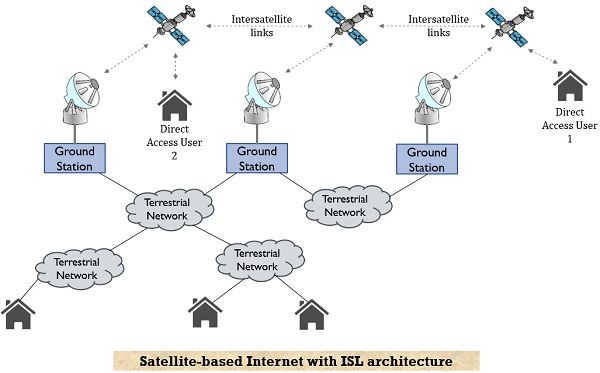 Such network combinedly uses two technologies. Here fibers are used along with the presence of satellites so that the internet can be provided to remote locations.

The three major components of satellite internet are:

The satellite internet works in a way that signals in the form of radio waves from ground stations are sent towards space where a satellite constellation is present at low earth orbit. The satellite transponder receives the incoming signal, performs necessary amplification within the network, and further reverts it back to the earth through a satellite dish. The satellite within the communication network in space supports two-way data communication.

This is all about Satellite Internet.